I recently managed a quick, two-night, mid-week, pre-Christmas getaway with my best friend at the historic Red Lion Inn in Stockbridge, Mass., in the heart of the Berkshires. The Inn is shown at the right of this 1967 illustration done for McCall’s magazine by Norman Rockwell, titled Home for Christmas (Stockbridge Main Street at Christmas). Rockwell’s own South Street home appears at the far right.

The original of this painting is on display at the nearby Norman Rockwell Museum. Please see my post about the museum by clicking here.

Each December, the citizens of Stockbridge recreate this iconic scene with a festive celebration that includes caroling and lining the street with vintage automobiles. Here’s a link to a description of the 2019 events.

According to information provided by the inn. a tavern began operating on the site in 1773, providing a way stop for travelers on the Boston to Albany road. The property was acquired in the early 1870s by a couple named Mr. and Mrs. Charles Plumb, and it is said that Mrs. Plumb was an avid antique collector and furnished the inn with her collection. The inn is still known for being filled with antiques. The property became known as the Stockbridge House and in the mid 1880s, could house 100 guests.

Looking towards the reception desk in the lobby. The highboy, the eagle, and the plates are just a few examples of the antique furnishings that fill the inn.

In 1896, the property was destroyed by fire, but incredibly, most of Mrs. Plumb’s collection was saved, and the inn was rebuilt over the winter, reopening in May, 1897. In 1968, Jack and Jane Fitzpatrick purchased the inn and headquartered their mail order company, Country Curtains, at the inn. The family still owns the inn, and it is operated by Mr. and Mrs. Fitzpatrick’s daughter and granddaughter (although sadly, at least for me, Country Curtains ceased operation in 2017, although Vermont Country Store now sells many of their products.) 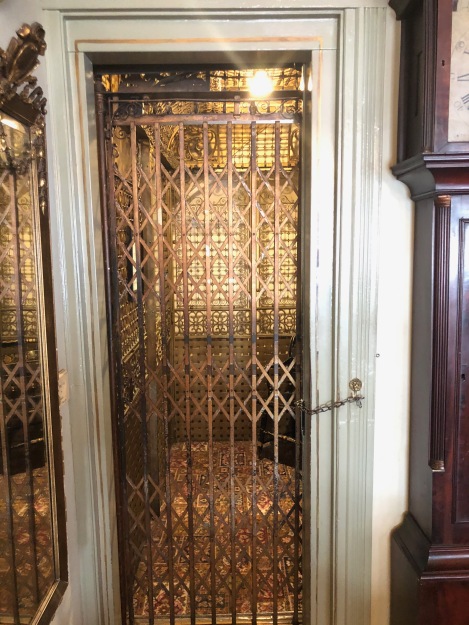 Old elevator that is still used upon request. 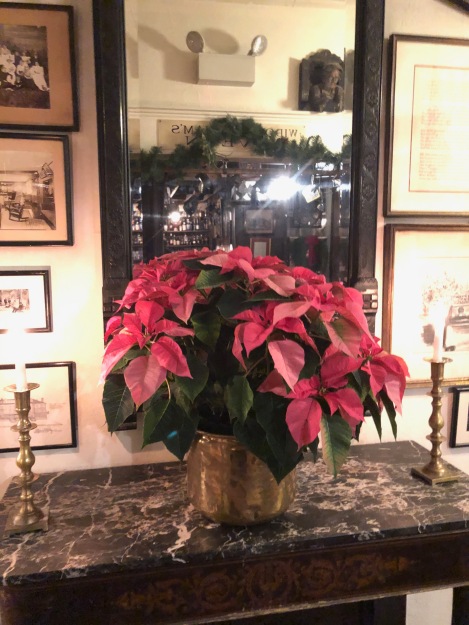 There are a variety of accommodations available, in addition to rooms in the main inn. For more information, link to the inn’s Web site here.

We had a charming room in the main inn, with two double beds and a comfortable, separate sitting room with couch, desk and easy chairs. The rugs are braided, and the walls are wallpapered in homey prints. Our up-to-date bathroom had a shower with glass door and a vintage claw-foot bathtub. Our mid-week rate was about $211 a night plus tax, plus a fee designated for historic preservation purposes. I obtained a discount because I am a member of the National Trust for Historic Preservation and the hotel is affiliated with the Historic Hotels of America. 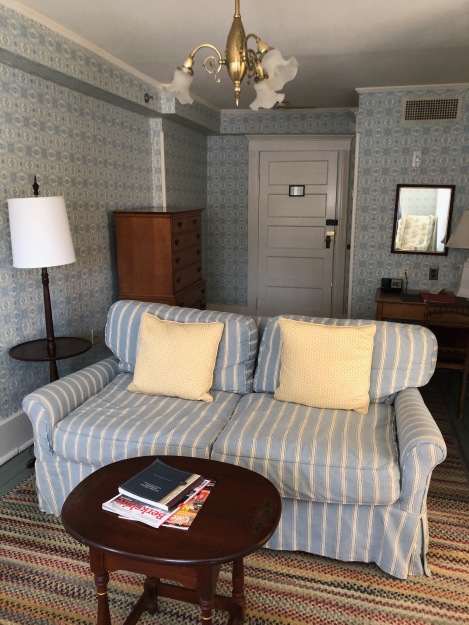 There are no key cards or electronic gadgets here — you are issued an old-fashioned key. Don’t expect a fancy coffee-making machine in your room, although there were chocolates left on the bedstand.

Our main objective in staying at the inn was simply to soak up the atmosphere, enjoy the Christmas decorations, and hang out in the tavern and lobby. We ate dinner and lunch at the inn — in the tavern as well as a light dinner in the pub called The Lion’s Den, that is housed in the basement of the inn. I wasn’t blown away by the food, to be honest, but the historic setting made up for any lack of presentation or innovation. Our breakfasts were in the main dining room. It was fairly predictable fare, but satisfying. 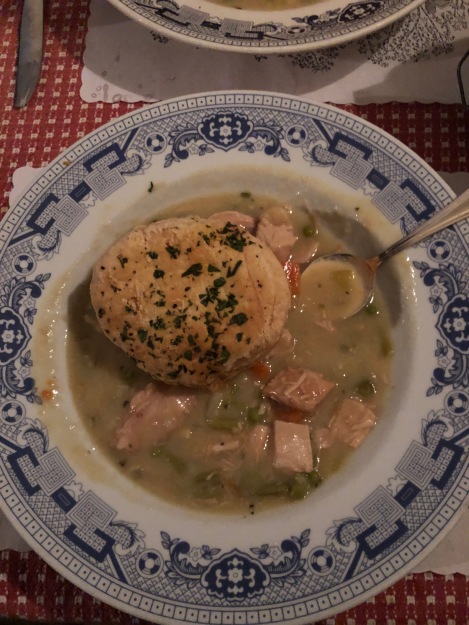 The chicken pot pie was kind of a chicken stew with a puff pastry sitting on top of it. 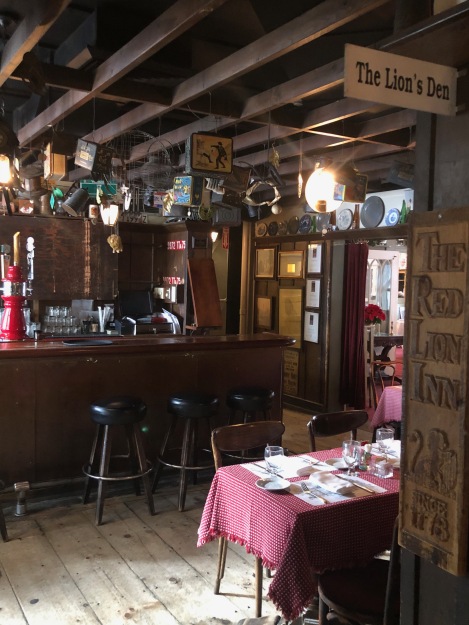 A cozy nook in the tavern. 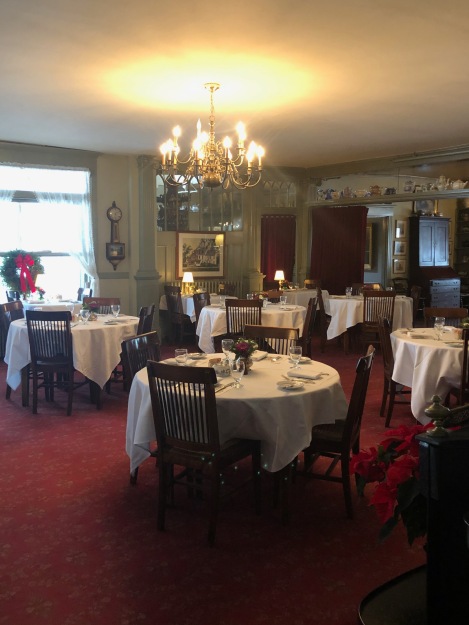 My friend and I planned our two-day getaway at the Red Lion Inn in part, because it is located almost exactly at the halfway point between our separate homes. There is a wood-burning fireplace in the lobby, but the furniture was oddly configured so that the seating did not face the fireplace. We couldn’t quite fathom why this was done, and we, along with other guests, found ourselves dragging chairs around the lobby to position ourselves in front of the fire.

Fireplace in the Red Lion Inn lobby, with the mother lode of Byers’ Choice Carolers on the mantel above.

Another view of the lobby, showing the Christmas tree. Some guests commented that they wished the tree had lights on it. The guest is petting Norman, the house cat. 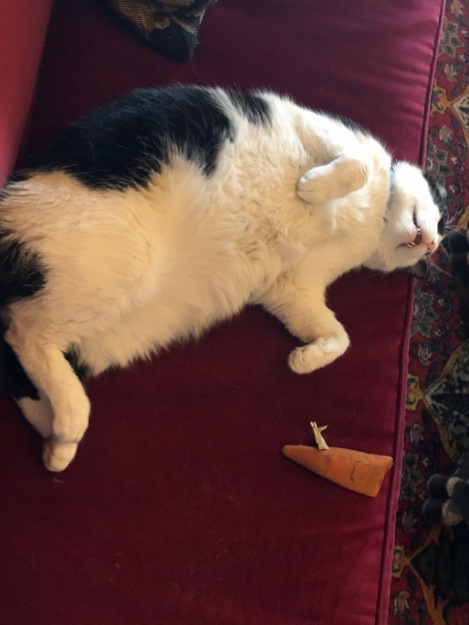 Norman is quite a sensation at the Red Lion Inn. He knows how to relax. His catnip toy is next to him.

As I said, we didn’t venture too far from the inn, but we did make it to one destination I had in mind — the Annie Selke outlet store, called the Outlet at Pine Cone Hill,  at 125 Pecks Road, Pittsfield, Mass. Annie Selke is a well-known designer of bedding, rugs (Dash & Albert) and home furnishings. The store is located on the site of a 19th century textile factory that now serves at the Annie Selke headquarters. I was looking for some small rugs, and I was not disappointed. Trust me — if you like these products, make a trip here.

Finally, here are a couple exterior photos of the inn and Main Street, albeit with current-day cars, not those from the days when Norman Rockwell lived around the corner.