Although my husband and I have been in Stockbridge, Mass., many times, we never made a point of visiting the Norman Rockwell Museum there until this September. We both enjoyed the museum so much that we wondered out loud why it had taken us so long to get there. 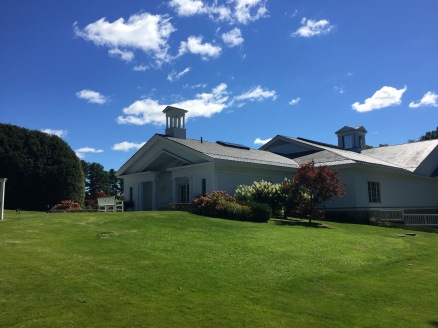 We also had an excellent lunch at the Red Lion Inn, the classic New England lodging in the center of town.

Of course Stockbridge is a great destination for a weekend getaway because of the many nearby cultural attractions, including sculptor Daniel Chester French’s summer home, Chesterwood, and Naumkeag, the Gilded Age country estate of the Choate family. And nearby, closer to Lenox, is Edith Wharton’s estate, The Mount, and Tanglewood (the summer home of the Boston Symphony).

While most of the historic house museums in the Stockbridge area close after Columbus Day, the Rockwell Museum is a year-round attraction (although Rockwell’s studio, a separate building on the museum grounds, is only open seasonally, this year, May to November 13).

Norman Rockwell (1894-1978) lived in Stockbridge for the last 25 years of his life, after moving there in 1953 from Arlington, Vermont, with his second wife, Mary (Barstow).  (He spent his childhood in New York City and the metropolitan area.) Mary was the mother of Rockwell’s children, three sons, all of whom are living.

We learned from a guide at the museum that the reason for the move to Stockbridge was because Mary was being treated at the Riggs Center, a psychiatric hospital located in Stockbridge. The Rockwells moved to a home only a few blocks from the Riggs Center, on South Street, and the artist set up his studio in a carriage house to the rear of the home.

Mary died in 1959, and in 1961, Rockwell married his third wife, Molly Punderson. In 1973 Rockwell created a trust to hold his works, which would later become the Norman Rockwell Museum. In 1976 the artist donated his studio and its content to the museum. The artist passed away in 1978.

The museum was originally located at the Old Corner House in downtown Stockbridge. It has been in its current location, a couple of miles outside the village, since 1993. The museum is set on a pastoral 36-acre tract of land known as the Linwood Estate, which was the 19th century home of New York attorney Charles Butler, a law partner of  Joseph Hodges Choate, owner of nearby Naumkeag.

At the museum, the visitor can see a number of well-known works, including a number of paintings that were among Rockwell’s more than 300 Saturday Evening Post covers. 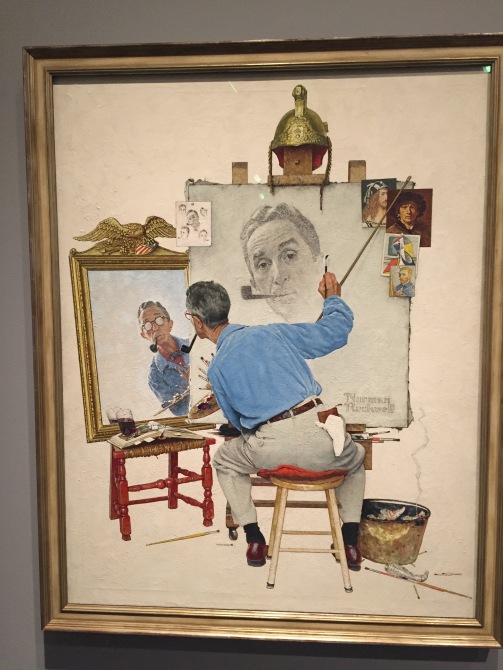 Norman Rockwell began selling works to Saturday Evening Post in 1916. The first is titled “Mother’s Day Off.” This and several other early covers are on display. 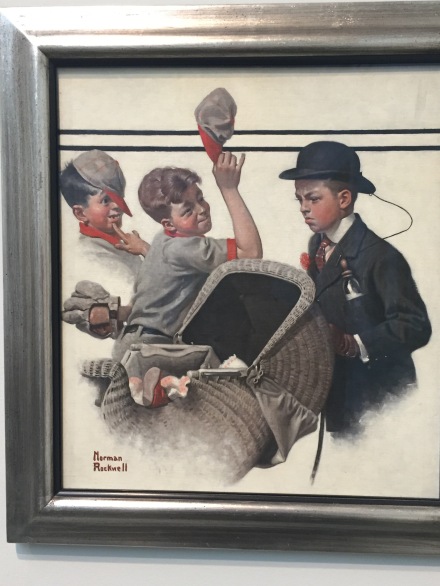 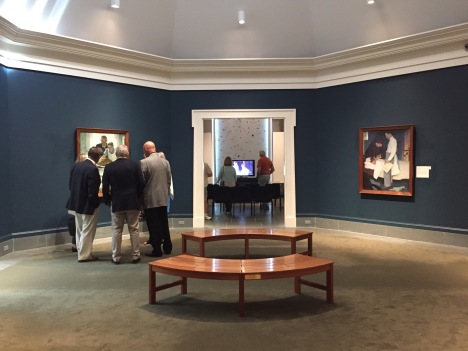 Rockwell was inspired to created these works after Franklin D. Roosevelt’s State of the Union address in January 1941, on the eve of World War II. The paintings were used as Saturday Evening Post covers during four consecutive weeks in 1943, and were paired with essays by prominent American writers and historians. 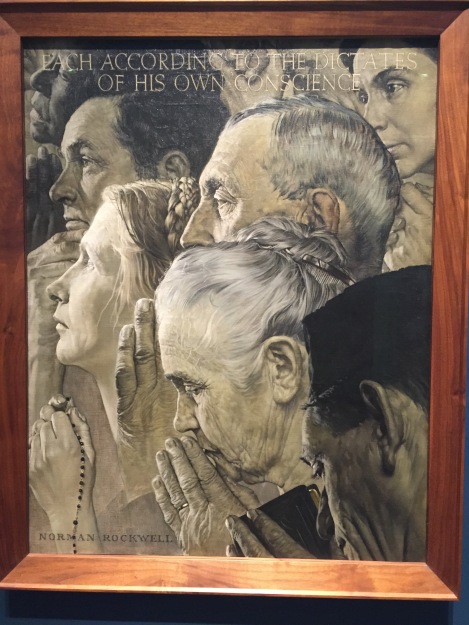 Some of the best examples on view at the museum included “Gossips,” depicting 14 of his acquaintances from Arlington, Vermont, in a chain of story-telling, and Rockwell himself as the “victim” of the gossip (bottom row, right side, below). 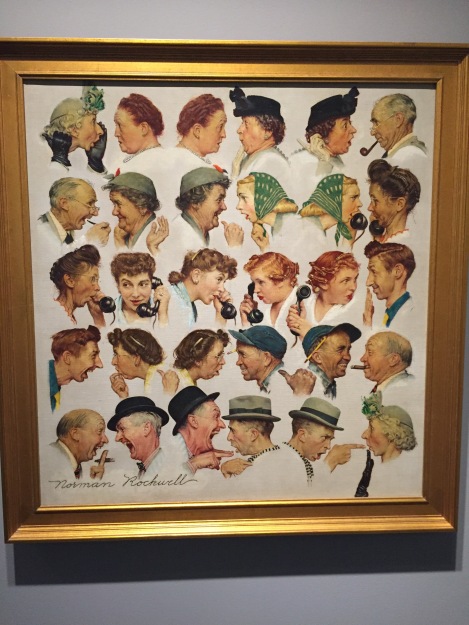 “Gossips” (1948). Rockwell depicted himself as the subject of the storytelling, in the bottom row, right side.

“The Problem We All Live With” (1963), shows the young African-American girl Ruby Bridges — in front of a wall pelted with tomatoes and covered in epithets — being escorted to school in New Orleans by marshals after segregation was declared unconstitutional by the U.S. Supreme Court. It is a powerful experience to see the original painting up close. 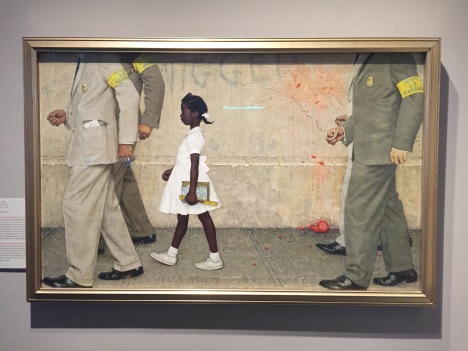 Another iconic Rockwell painting on display is “Home for Christmas,” published in McCall’s magazine in December, 1967.  It depicts a snowy scene of Stockbridge’s Main Street during the Christmas holidays. The oil painting is unusually wide (95 1/2″) and when reproduced in McCall’s, appeared as a pullout section. 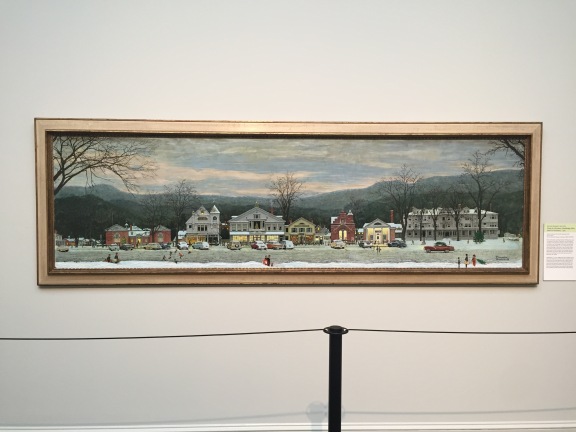 Other recognizable paintings on view include “The Golden Rule” (1961), showing  a diversity of religious faiths, ethnicities and races. At the time, Rockwell was quoted as saying “I’d been reading up on comparative religion. The thing is that all major religions have the Golden Rule in common. ‘Do unto others as you would have them do unto you.’ Not always the same words but the same meaning.” 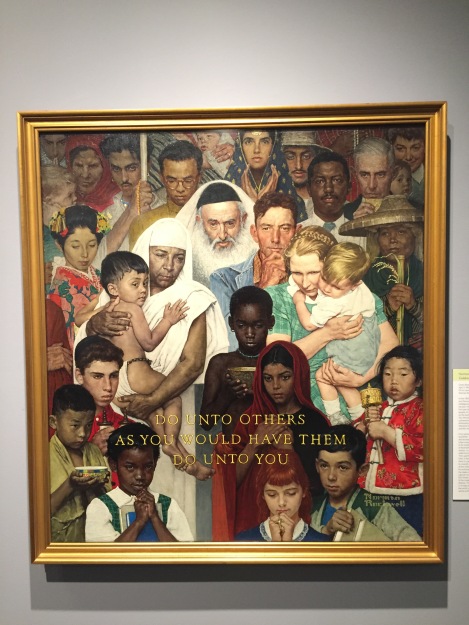 This 1956 painting entitled “The Discovery” caused me to laugh out loud: 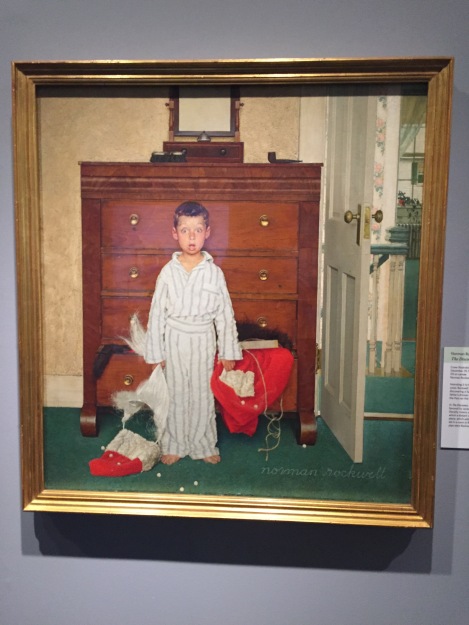 Rockwell’s studio was moved to the current museum property in 1986 from its original location behind the family’s home on South Street in Stockbridge, and is open this year from May to November 13. 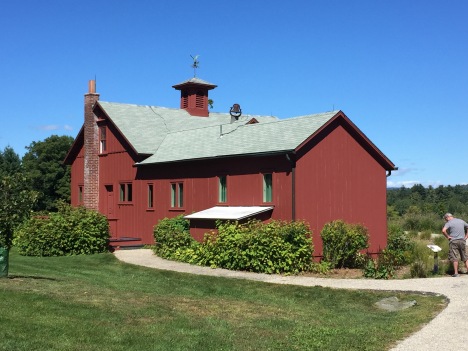 The interior of the studio is said to be set up exactly as the artist used it, complete with a pipe at the ready. 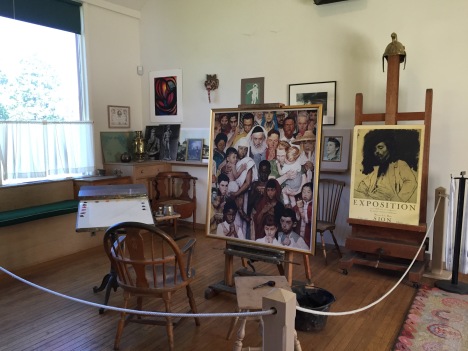 The Rockwell Museum’s exhibits goes beyond its namesake artist and his era.

The exhibit “Rockwell and Realism in an Abstract World,” now through Oct. 30, explores the relationship between realistic illustration and abstract art — and the struggle Rockwell experienced in reconciling his illustrative style with the rising group of contemporary artists.

“My ability evidently lies in telling stories and modern art doesn’t go in much for that sort of thing,” Rockwell is quoted.

But he could poke fun at himself at the same time. In one painting, “Connoisseur” (1961), Rockwell shows a man staring into a Jackson Pollock nonrepresentational painting as if trying to make sense of it. 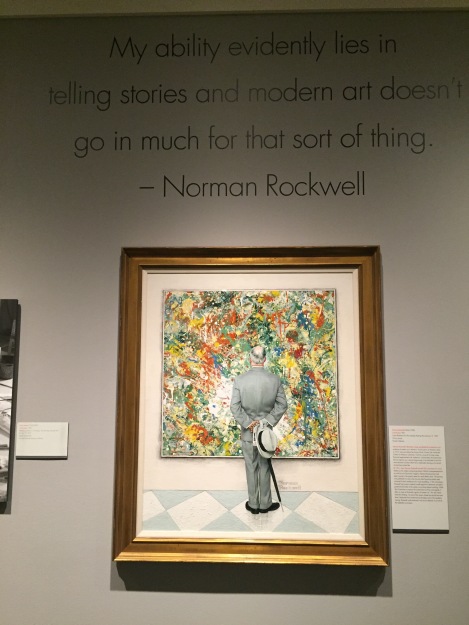 The Rockwell Museum Web site is at nrm.org. It’s open daily except for Thanksgiving, Christmas and New Year’s Day.

After visiting the museum, we drove into downtown Stockbridge and had lunch at the historic Red Lion Inn. The rambling inn offers year-round lodging and dining. 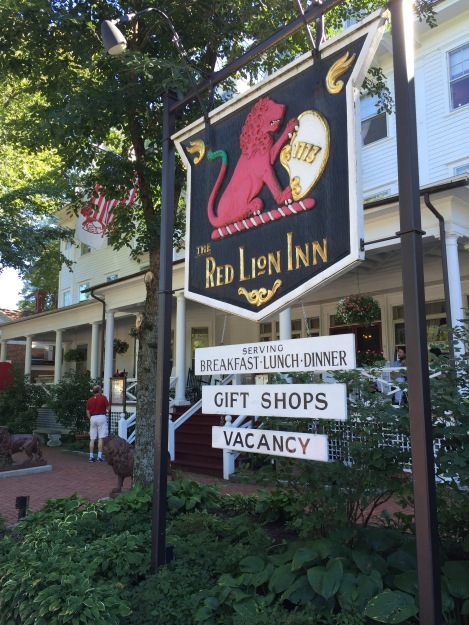 We arrived shortly after 2 p.m. We had the choice of lunch in the large, more formal dining room, or in the cozy tavern. We chose the latter.

Called Widow Bingham’s Tavern, it is quintessential New England — yellowed framed maps of the region on the wall, a collection of old lunch boxes hanging from exposed wooden ceiling beams. A gregarious bartender behind a nicely mellowed bar was having an animated conversation with a patron about college sports at southern universities. 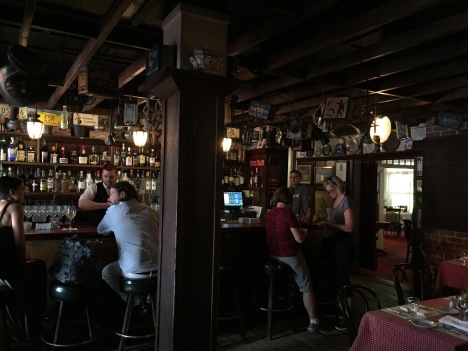 Lunch is served in the tavern noon to 4 p.m. Monday to Sunday.

I enjoyed Chicken Paillard with green beans ($22). We always loved this dish at the now-closed Montcalm Restaurant. It was accompanied by a field greens salad.

I also had a bright glass of Spasso (It.) Pinot Grigio for $8. My husband Mark was as pleased with his glass of Pinot Blanc, as I was with my Grigio.

Mark chose the Red Lion Inn Chicken Pot Pie (with carrots, parsnips and peas) for $19. He gave it an enthusiastic thumbs up. When the dish took longer than expecte to arrive, the waitress explained that they didn’t have any ready to go and the chef made it from scratch.

We were also served a basket with toothsome rolls and tasty flatbreads.

It was our main meal of the day, not inexpensive but honest and really enjoyable.

We roamed the first floor of the inn after lunch admiring the antiques and collections of ceramics, including teapots  and a wall of blue and white Canton pottery. 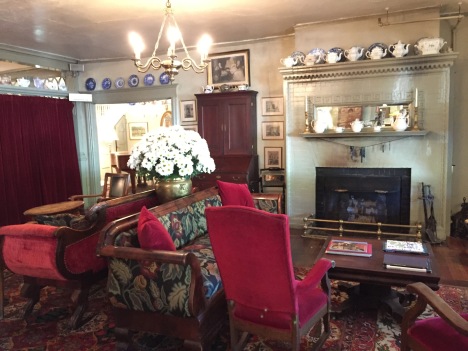 Here’s another area of the lobby: 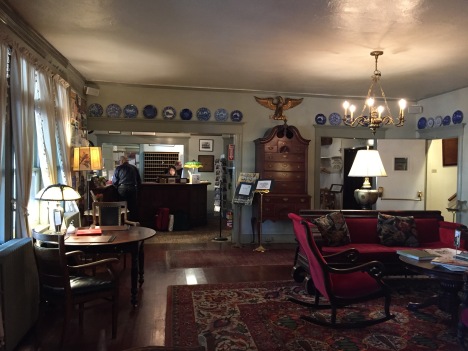 And an example of some of the blue and white Canton pottery on display: 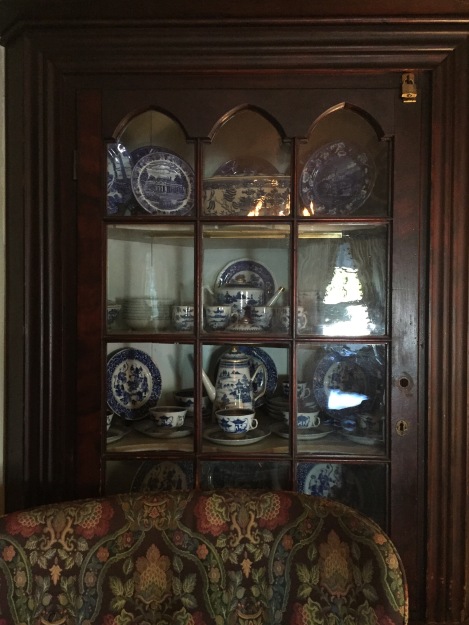 Some of the ceramics on display at the Red Lion Inn

The inn has been owned by the Fitzpatrick family since 1968. They also own the business Country Curtains, and it has a charming shop at the rear of the inn.