The Silk Road may have begun in China, but many people say the western terminus was the city of Macclesfield, in Cheshire, in northwest England. Macclesfield is known for once being the world’s largest producer of finished silk products. In the 1830s, 71 silk mills operated in this market town. 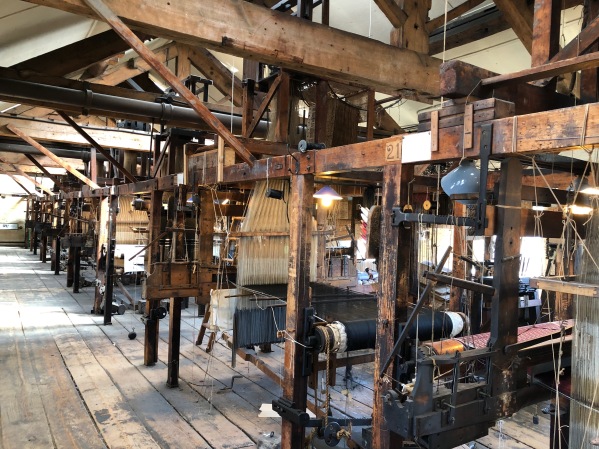 Today, you can walk through Paradise Mill, a working museum where visitors can see original Jacquard looms demonstrated by museum staff. Next to Paradise Mill is the Silk Museum, which presents an extensive exhibit on the history of silk weaving and printing, including a display of a number of looms.

Visitors to the Paradise Mill need to climb several flights of stairs to arrive at the floor that houses the looms and exhibits. Our group first heard from a docent about the process of spinning silk thread, and then winding it on bobbins to be used on the weaving looms. Frankly, not being a weaver myself, much of the process was lost on me.

Silkworm cocoon. Each is unraveled to produce an extremely long strand of raw silk. Our charming gentleman docent explained the process of obtaining and spinning silk thread.

Macclesfield became famous in part because of its use of the Jacquard looms, beginning in the early 19th century. This type of weaving, invented in France, uses a continuous series of punched cards to select the warp threads, thus creating complex patterns. At the time, the region was already a major producer of silk products. 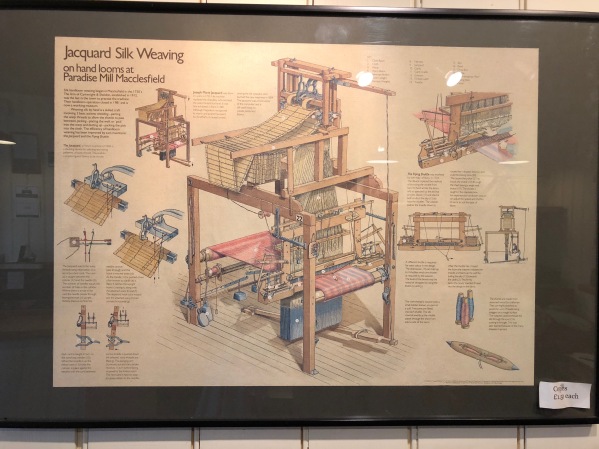 The first computer punch cards? Continuous rolls of these cards caused the loom to select and raise patterns of the warp threads.

A Jacquard fabric on the loom. 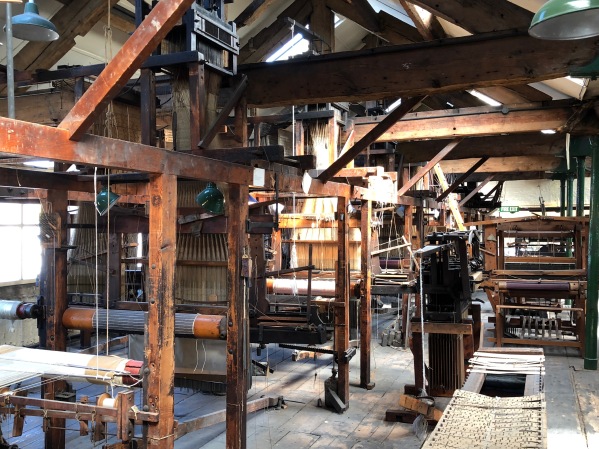 Another view of the loom room.

More Jacquard on a loom.

There are baskets and boxes of bobbins with silk thread throughout the mill. Long before the Jacquard looms were in use, Macclesfield was known for its silk button manufacturing.

Next to Paradise Mill is the Silk Museum, with quite an extensive display on the history of silk manufacturing, weaving and printing in this part of England.

I was most fascinated by the display of World War II escape scarves. These were silk scarves given to  British airmen and American paratroopers, printed with maps of various parts of Europe and Asia, to assist them in finding their way should they find themselves on the ground. They were lightweight, and could be hidden by being tucked into a secret spot.

I had first read about these scarves in a post on the Educated Traveler blog, here. At the Silk Museum, there are a few display cases about escape scarves, including one containing a dress made after the war from the scarves. 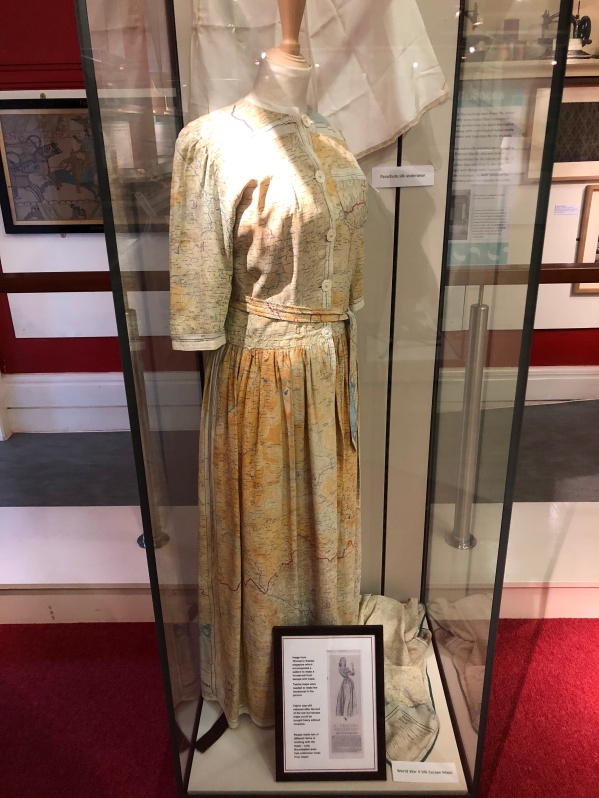 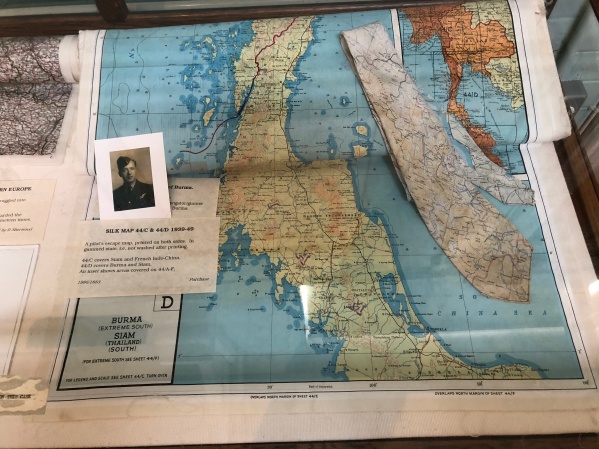 Another silk escape map, with a photo of an airman who used a map and a tie made of an escape map. The process that enabled the printing on both sides of the silk was developed in Macclesfield.

Some companies have manufactured reproduction escape scarves and sell them today. I was lucky to find one in the shop at the Churchill War Rooms in London. Here’s a link to the scarf in the Imperial War Museums Shop. Mine includes Holland and portions of France, Belgium and Germany.

There is much more to see at the Silk Museum, including a large room with looms. There is also quite a story to be told here of the Industrial Revolution and working conditions in the mills, including the widespread use of child labor, which visitors can explore further at the nearby site of Quarry Bank Mill, operated by the National Trust.

View of Val d”Orcia, Montepulciano, Tuscany, Italy. Keeping our Italian friends in mind as they cope with the Coronavirus outbreak.