Home » Food & Drink » Thanksgiving dinner: the mother of all menus

I’d bet that nearly everyone reading this can recite, item by item, every single dish served at their family’s Thanksgiving table while growing up. The Thanksgiving menu is pretty much inviolate. Even the slightest change is noticed by all. I think I still remember the year my mother started adding apples to her stuffing. 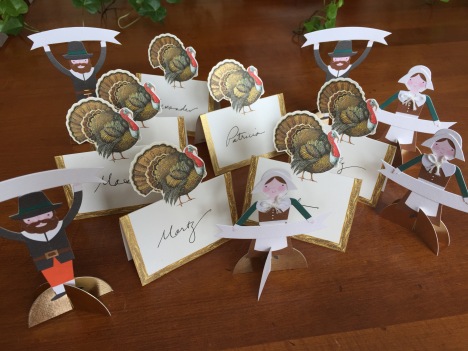 Getting the place cards ready—Pilgrims ready to be labeled, along with their flock! The turkey cards are from Caspari. (See my post from 8/16/16 about Caspari.)

We almost always hosted Thanksgiving dinner at our house, instead of traveling. Sometimes my grandparents or other family would come, but it was never a huge crowd since our relatives all lived quite a distance away.

In terms of the menu, we knew exactly what to expect. We had turkey, of course; stuffing, always made with a base of Pepperidge Farm herbed bread cubes; giblet gravy, even though the thought of what giblets are grossed us out; sweet potatoes with toasted marshmallows on top; mashed white potatoes; gravy; tossed salad; creamed corn; green peas; our once-a-year cranberry/pineapple/jello “salad”; and whole cranberry sauce.

The meal always started with a relish tray of celery, green and black olives, and scallions, served in one of my mother’s antique cut glass dishes. As a child, I never really understood what that was all about, except that maybe it made the meal more special, like going to a fancy restaurant. Adding to the specialness of the occasion were the crisply pressed white linen tablecloth and napkins, the really good china, cut-glass water goblets, the silver serving dishes and the sterling flatware.

It always felt like we were getting away with something at Thanksgiving, having roasted marshmallows as part of the meal. For dessert, it was usually pumpkin or mincemeat pie. 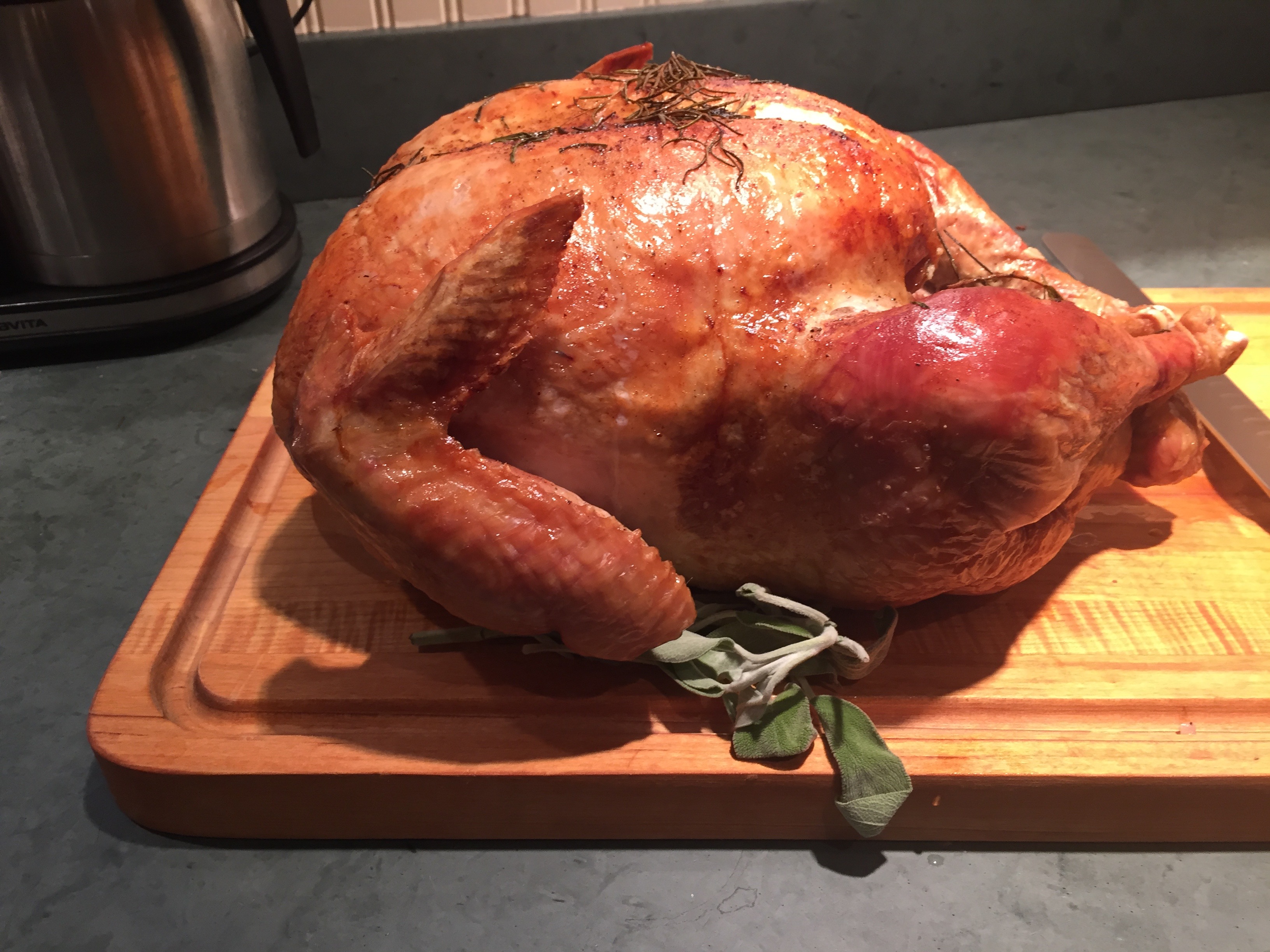 When I met my yet-to-be-husband, and went to my first Thanksgiving dinner at his mother’s house, I found lot of similarities in the menu, although of course everyone’s stuffing is unique, and his mother served creamed onions and broccoli, unlike mine.

The first year one cooks his or her own Thanksgiving dinner is a milestone. I didn’t cook my first Thanksgiving turkey until I was married, in my mid-thirties. We had just had our kitchen gutted and completely redone. My mother and stepfather, my sister and brother-in-law, my nieces, my step-nephew, a family friend, and my new mother-in-law were coming to dinner. The pressure was on.

I pored over the Joy of Cooking and Martha Stewart’s magazine columns, trying to figure out the best way to cook the perfect turkey. I can’t even describe how stressed out I was about the whole thing. It became hugely important to me to get everything just right.

I ended up covering the turkey in cheesecloth that had been soaked in melted butter and white wine, and I followed Martha’s elaborate instructions about checking the bird, basting the bird, covering and uncovering the bird. I remember searching for cheesecloth in the supermarket, thinking, how can something so universal, so basic, as roasting a turkey, be so complicated?

For that Thanksgiving meal, my very first own, I managed to replicate everything my mother had always made. I wouldn’t have dreamed of altering the menu, or it wouldn’t really be Thanksgiving. My mother gave me her recipes and shared her secrets, some of which were no doubt passed on to her from my grandmother. And one thing I especially treasure is her handwritten recipe for cranberry/pineapple/jello “salad”, which is now taped to the inside cover of my Joy of Cooking, just as it was in hers. 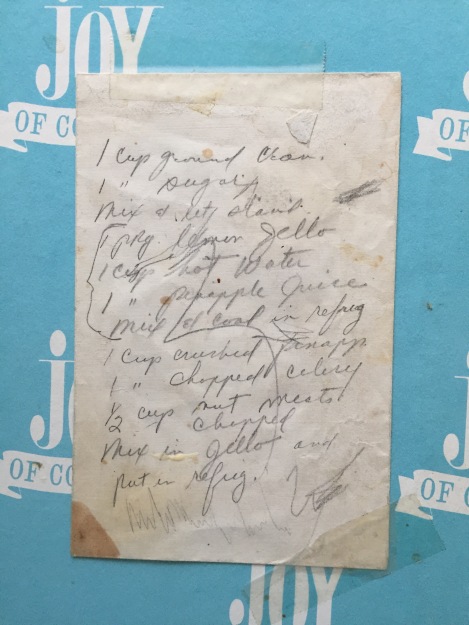 It’s a classic: my mother’s handwritten recipe for her cranberry/pineapple/jello “salad”

Now, I do admit that I have changed a couple of my family’s traditional favorites a bit. But just a bit. The creamed corn that my mother made using canned corn and crumbled saltine crackers has evolved into a toothsome corn pudding from a Colonial Williamsburg recipe. Likewise, I’ve converted her sweet potatoes (sliced, sprinkled with brown sugar, topped with mini marshmallows and baked) into a more complex sweet potato casserole (also courtesy of a Colonial Williamsburg cookbook). But the basic ingredients are the same.

When my two boys (now, young men) come home for Thanksgiving, these newly configured dishes are among those that they look forward to (especially the corn pudding) and what they will remember as part of their family Thanksgiving dinner. One thing that will never disappear from our table, though, is my mother’s cranberry/pineapple/jello “salad.”

4 thoughts on “Thanksgiving dinner: the mother of all menus”