My husband and I have just returned from a 17-day journey in India. I intend to post a number of articles on this blog about our trip, but I’m starting with the flight itself. 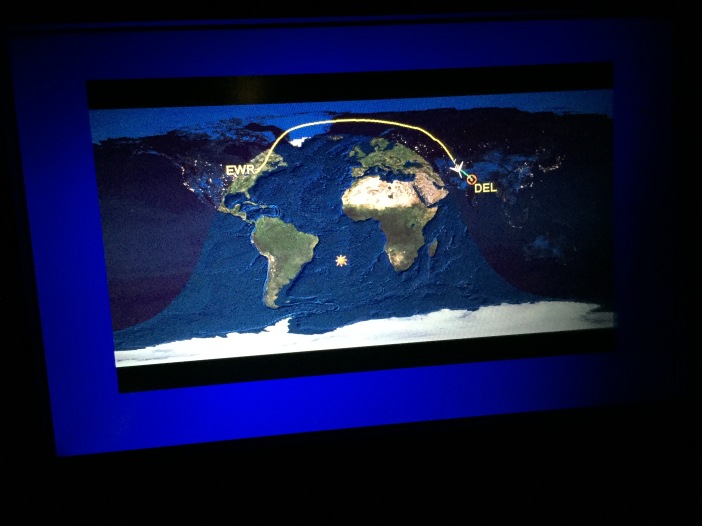 We decided to splurge and fly Business/First on United, for the approximately 14 1/2 hour nonstop flight from Newark, N.J. to Delhi, and the return 15 1/2 hour flight. Having flown overseas a number of times previously in United Economy, albeit for shorter flights, we couldn’t imagine spending all those hours with our knees practically stuck up into our chins.

By using the Google Flights Web site, I was able to easily compare prices for various departure dates and times and find the best prices available. By leaving the United States on New Year’s Eve night and returning mid-week, on a Wednesday, I maximized the savings.

Don’t get me wrong— the flights were still expensive, and way, way more than we have ever paid for air fare. But sometimes you just decide to “go for it.” And we did.

We had heard a bit of hoopla in television and print ads about United transforming their long-haul international flights in Business/First to something called “Polaris,” beginning in December, 2016. Since we had never flown the top tier on United, we didn’t have much to compare to this new Polaris experience. This is from the United Web site: “On December 1, 2016, United Polaris business class service replaced United BusinessFirst® service and United Polaris first class service replaced United Global First℠ on all international flights and all international aircraft. We anxiously await the arrival of our new United Polaris seat, which will begin flying in early 2017, but in the meantime travelers can enjoy all other aspects of the United Polaris inflight service, from enhanced dining to restful sleep.”

Both our flights were on a Boeing 777, and when we entered the cabin, I have to say, I was one happy camper. And I mean that literally, since the main benefit of paying the premium for this level of ticket is the “lie flat” seat, not to mention the capacious leg room.

I understood from the Web site and talking to a flight attendant that once replaced, all the Polaris seats will have direct aisle access. As they are now, if you’re in a window seat, you do have to climb over your neighbor to access the aisle if his or her seat is fully reclined. But seriously, it’s not a deal breaker.

Says United of the coming upgrades: “In locations where two seats are next to each other, there’s a powered privacy divider so you can easily tuck yourself away and forget that there are other travelers nearby. We’ve even included an illuminated “do not disturb” sign that lets you signal to your flight attendants that you’d prefer not to be awakened.”

The seats not only recline fully, but you can adjust the tilt and height of the portion under your lower legs, as well as that of the seat back—kind of like an in-flight La-Z-Boy® recliner. Basically, you can get yourself into just about any comfy position you like. 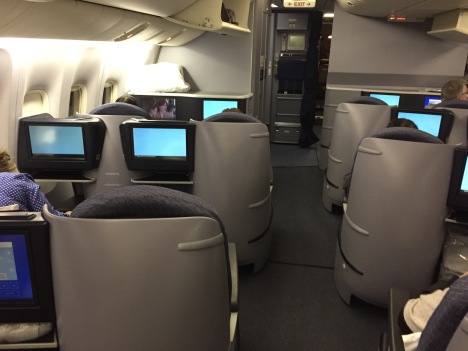 Immediately after we sat down, the flight attendant brought us warm washcloths and offered us drinks–wine, soda, presumably anything. The beverages were served with a nice piece of chocolate. 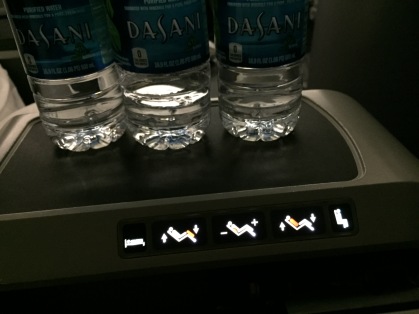 The controls for the lie-flat seat

The Business/First seats on the 777 follow a two-two-two configuration across the body of the jet. Each seat is positioned so your neighbor is not exactly lined up with you, which provides some measure of privacy, particularly when you recline your seat, since there’s a curved piece that shields you from the person next to you.

Adjacent to the seat is a platform that has charging ports for your electronic devices, as well as beefy noise-cancelling headphones. The seat’s screen for viewing movies, TV shows, and the flight map is larger than I’ve ever seen on a seat back in a plane.

Each seat has two blankets— one lightweight, and the other more of a comforter. There are two pillows for each seat, embroidered with “Saks Fifth Avenue.” 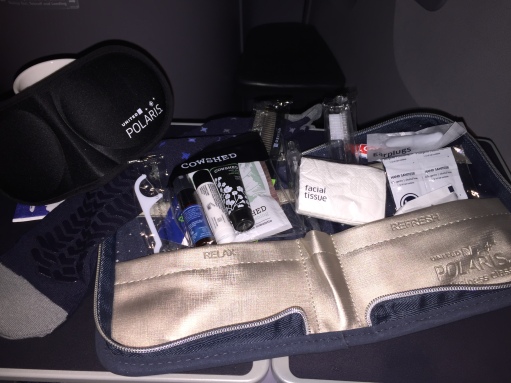 You are offered slippers as well as pajamas with a United logo, which came in small/medium or large/extra large. They are cotton, with drawstring pants and long sleeved top. Quite comfy and soft, although I didn’t see anyone actually wearing the pajamas and I suspect most people just bring them home.

About an hour into our flight, we were served dinner, which was unlike any airplane food we’ve ever had. Our choices were described in a booklet. Our appetizer was smoked duck with cranberry pumpkin seed faro salad. My husband had an Indian dish— spiced ground lamb with a curried tomato fenugreek sauce, lemon lentil with cilantro, garbanzo bean and vegetable rice pilaf, okra in Indian spices, and mint yogurt sauce and spiced pickled vegetables. Now that’s a mouthful. He enjoyed it.

I went for the Asian fusion chicken soup– described in the menu as Thai-style coconut ginger cream, Korean inspired chicken and udon noodles. It was creamy, mildly spicy and satisfying.

We were offered several varieties of wine from a cart, and while I did not write down the choices, they were not your average “house” wines, and I enjoyed a nice Cabernet Sauvignon on the return flight with dinner.

For dessert, we were offered a cheese plate, as well as ice cream sundaes made on the spot, and mini cakes, pies and parfaits.

At the other end of the flight, about a hour before landing, you’re served breakfast. Choices included a Provence-stye omelette served with chicken sausage, potatoes, and fruit; and savory semolina porridge with spiced peas, stuffed potato bread, Indian flat bread, and spicy chili mint chutney.

The coffee by illy received my thumbs up, and I am highly particular about my roasts.

On our return flight, the dinner entrees were different. I had lamb chops, which were surprisingly good (I asked the flight attendant her opinion before making that choice since lamb chops on a plane seemed risky to me), and my husband had tandoori chicken, which he thought was tasty, even after having tandoori a number of times during our time in India.

Not long after dinner the cabin lights were dimmed and most passengers reclined their seats to sleep or watch a movie. The lights remained low and the activity in the cabin was subdued for close to eight hours. But if we needed anything, like water, there was always a flight attendant there to help.

Bottom line, given the 10 1/2 hour difference in time between our home’s Eastern Standard Time and India Standard Time (surprisingly, there’s only one time zone in India), the jet lag is severe, and we did feel that the ability to get some real sleep on the plane helped us adjust after landing. Problem is, it will be hard to go back to economy knowing what it’s like in the front of the plane! 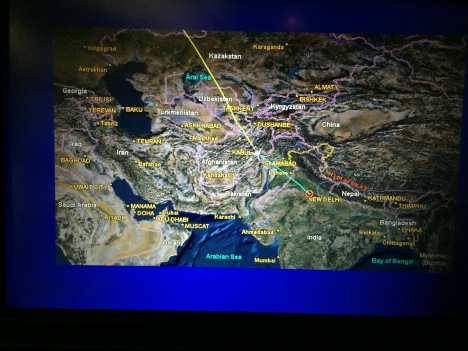