We decided to try something new this year for Thanksgiving dinner. We ordered a locally-raised “heritage” turkey— a Narragansett Red, to be exact, raised in southern Washington County. 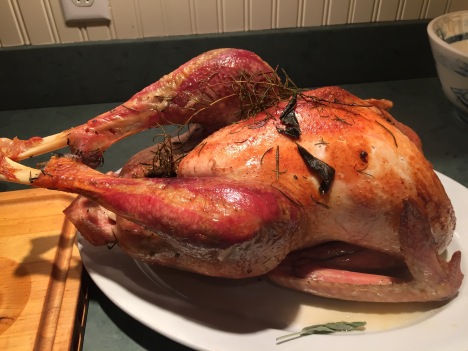 The heritage Narragansett turkey after roasting

Named for Rhode Island’s Narragansett Bay, these turkeys are descended from domestic turkeys the colonists brought to America in the 1600’s, which then bred with wild turkeys.

I ordered the turkey through the Glens Falls Food Co-Op, knowing it was being raised at Gotta Get a Goat Farm, in Cambridge. I ordered the bird about 2 months ago, checking the box to request the largest size offered — 18 to 20 pounds.

On the Saturday before Thanksgiving, I got a cell phone call from the farmer, Doug Perry, telling me the birds were going to be processed the next day and would be ready for pick up at the Co-Op on Tuesday.

He also said the turkeys were coming in smaller than predicted, in part because they got a lot of exercise. “How much smaller?” I asked. Doug said probably in the mid-teens. When I picked the bird up Tuesday, though it weighed in at 10.8 pounds.

This bird, no matter how tasty or historically correct, was not going to be big enough.

This required an emergency call to my husband from my car in the Food Co-Op parking lot, frantically asking him to call Lewis Super in Hudson Falls, to see if they had any of their fresh Jaindl turkeys available in the 15-pound range. They did, and he drove over to grab one. We’ve had Jaindl turkeys from Lewis’s for Thanksgiving for many years.

So I ended up with two turkeys— one “heritage” and one a broad breasted modern turkey from the much larger-scale Jaindl farm in Pennsylvania.

The heritage turkey looked a lot more like the wild turkeys who visit our property than the broad breasted birds in the supermarket. The breast was not especially large, and the legs were about twice as long as the Jaindl, which is bred for its meat, not its agility. In fact, commercial broad breasted turkeys have such short legs and are so top heavy, they can’t breed naturally and only reproduce by artificial insemination.

When Doug Perry called me to update me on our heritage turkey’s progress (and imminent demise), he recommended brining the bird before roasting it. I was initially reluctant, thinking it might make the meat salty and that adding flavor to a heritage turkey might be unnecessary. But Doug said the brine would not make the meat salty, and that it provides moisture and enhances flavor.

When I picked up our heritage turkey at the Food Co-op, I also picked up a card with Doug’s recommended brining recipe. I soaked the bird in the brine solution for about 24 hours before roasting it on Thanksgiving day. 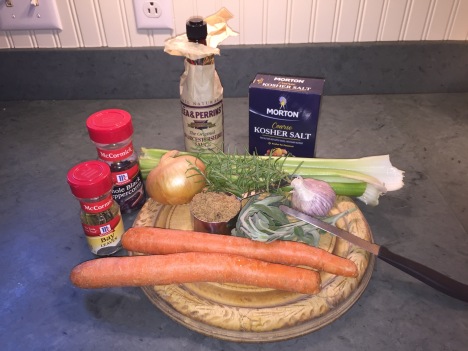 As for the Jaindl, no brine, just the usual bread stuffing (with turkey sausage, apples and raisins) inside, butter and olive oil and fresh herbs on top. In the heritage bird, instead of bread stuffing, I threw some chopped onion, apples and herbs inside — kind of what I imagined the colonists might have done. 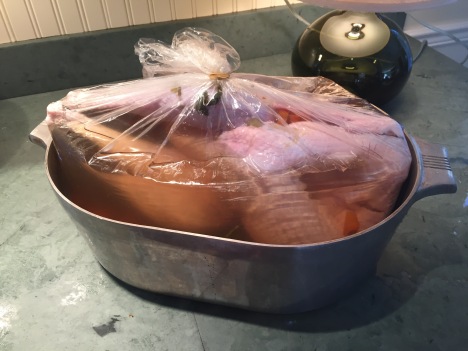 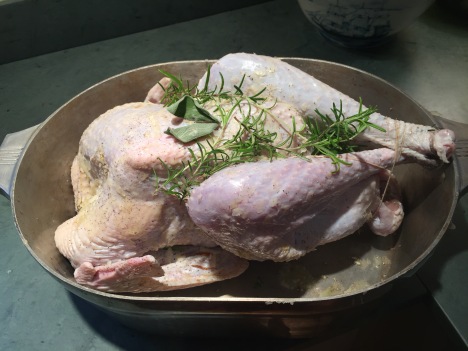 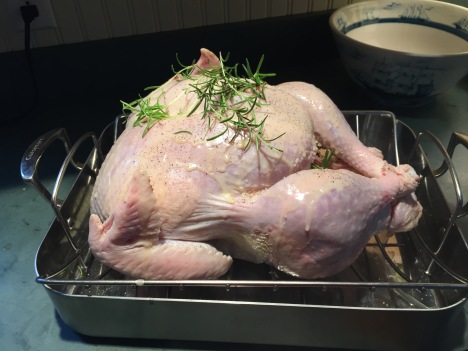 So what’s the verdict?

The heritage bird was delicious — moister and with far more flavor than the Jaindl. But there is far less white breast meat than you get with a modern turkey. And at $6.50 a pound, the cost is almost prohibitive. The Jaindl was $2.49 a pound. 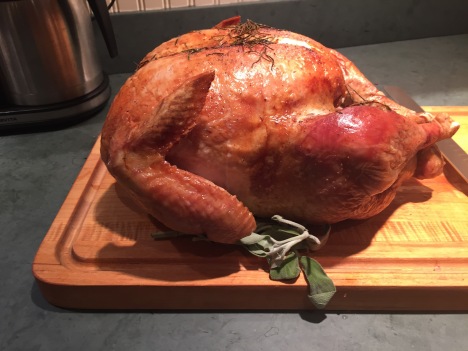 We like the idea of helping support local agriculture and keeping a heritage breed going — and pursuing the flavor that my husband fondly remembers from the days of the Pepper Turkey Farm in Wilton.

But maybe if more people go for heritage birds, more farms will grow them and the cost may go down. We would consider having a heritage bird again, but if we can’t depend on getting one big enough, we would always have to have a backup plan.

And I do have to add— the heritage turkey carcass made for a fantastic turkey noodle soup! 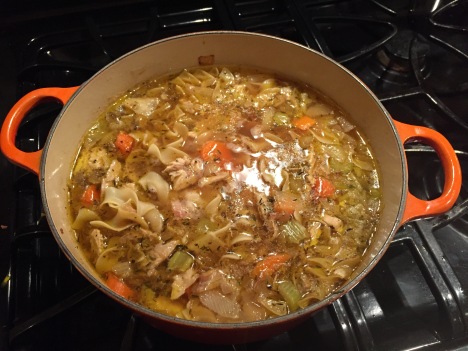