With our older son living in, dare I say it — Hollywood —we have been making regular trips out to Los Angeles from northern New York state to visit him since he moved there in the fall of 2014. A city that initially seemed to us overwhelming in its sprawl and sheer unmanageability now feels more familiar. We’ve found neighborhoods, restaurants and spots we particularly like, and my husband and I have grown to look forward to our periodic trips to La La Land. 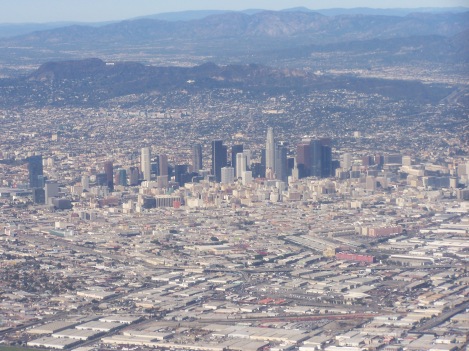 Seen from the air —flying west into LAX, downtown Los Angeles rises above a sprawling expanse. In the distance are the Hollywood Hills, part of the Santa Monica Mountains (that white horizontal blur near the left side at the top of the first range is the famed Hollywood sign), and the San Gabriel mountains beyond.