A newly-opened exhibit at the Old Fort House in Fort Edward highlights significant objects and paintings in the collection, and reveals some surprising information tied to those objects. Click here for the museum’s Web site.

“A Century of Collecting: Treasures from the Old Fort House” was researched by guest curator Jillian Mulder, who serves as curator of the Chapman Historical Museum in Glens Falls. 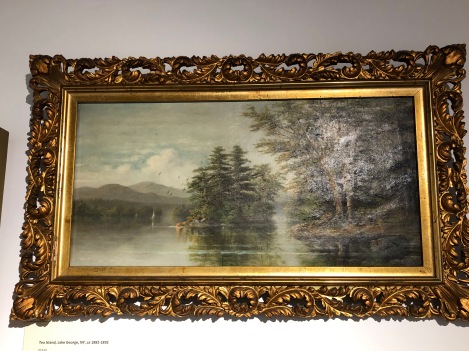 “I’m hoping that people recognize that Fort Edward has this terrific collection,” says Ms. Mulder. “Go see it. Take some pride in it. It’s worth valuing.”

The exhibit contains two paintings by Joseph Jeffers Dodge (1917- 1997), who from 1941 to 1962 taught painting and drawing at the Hyde Collection in Glens Falls and helped to transform it from a private collection to a public art museum. 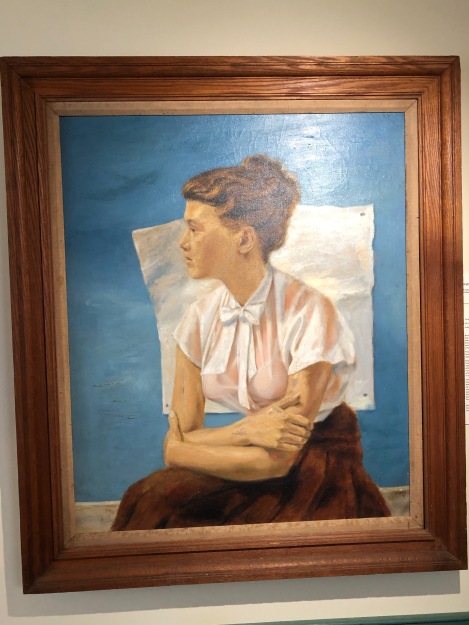 “Fifi,” a 1945 portrait by Joseph Jeffers Dodge, who played a key role in establishing the Hyde Collection in Glens Falls as an art museum and founding the Fort Edward Art Center.

Mr. Dodge was also instrumental in establishing the Fort Edward Art Center and he donated to it his painting “Fifi,” a 1945 portrait that is included in this exhibit. Ms. Mullder discovered that a small study for this portrait is held by the Hyde. 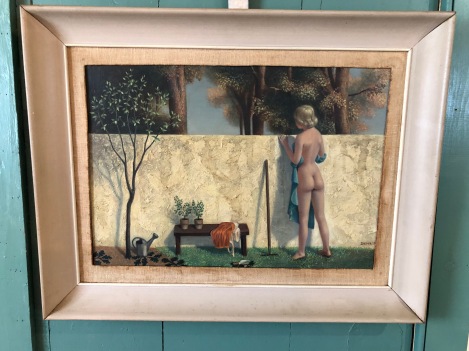 She also did a portrait of young Lulu Cooper, who died in 1883 at the age of 13. Ms. Mulder discovered that after Lulu’s death, her family hired master stone carver Charles Calverly to do a bas relief of Lulu, which is mounted on her headstone in nearby Union Cemetery, covered by glass. Calverley’s works are found in the Metropolitan Museum of Art, at the U.S. Capitol, and in other significant collections. 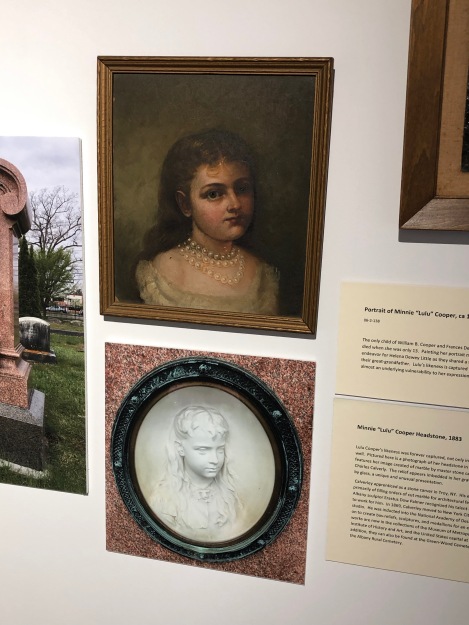 The exhibit has a large portrait of William Little Lee, the Sandy Hill (now Hudson Falls) resident who in 1846 persuaded Charles Reed Bishop of Glens Falls to join him on a voyage to the Oregon Territory. Instead, fatefully, they ended up in the Kingdom of Hawaii. Mr. Bishop married royal princess Bernice Pauahi Bishop and became a leading businessman and benefactor in Hawaii. 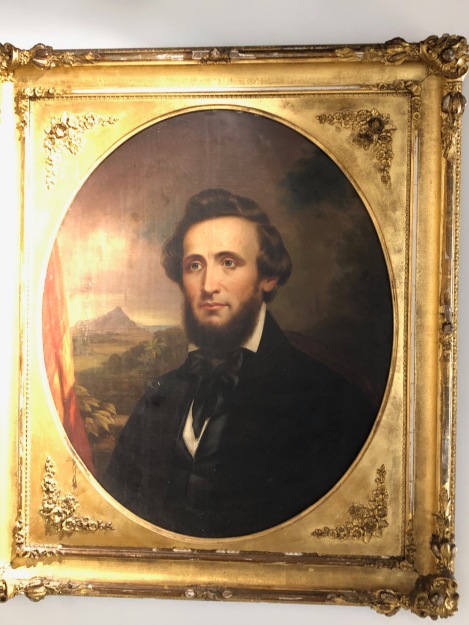 Mr. Lee helped set up a formalized legal system in Hawaii and was named the first Chief Justice of the Hawaii Supreme Court, serving from 1848-1857.

From the 1850s into the 1920s, Fort Edward was famous for its many pottery factories. The exhibit includes a nice collection of utilitarian stoneware with cobalt blue designs.

Other items on display relate to the paper industry in Fort Edward, which continues today with Irving Tissue; artifacts associated with the story of Jane McCrea; a needlepoint tapestry which is said to have come from Teddy Roosevelt’s Oyster Bay home; and many other items of interest. 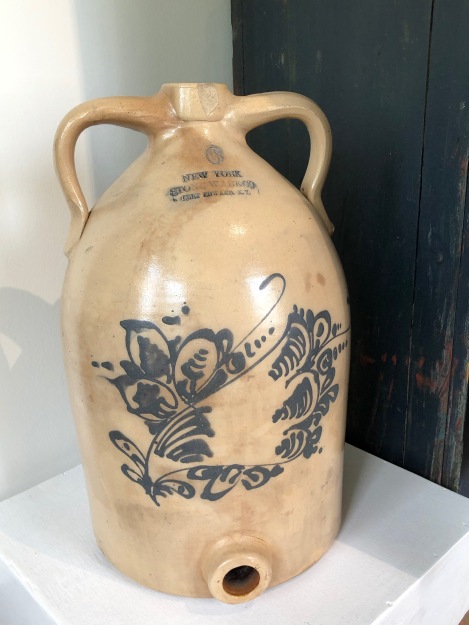 Many potteries operated in Fort Edward from the 1850s to the 1920s. Here’s a nice example of a jug with cobalt blue glaze decoration. 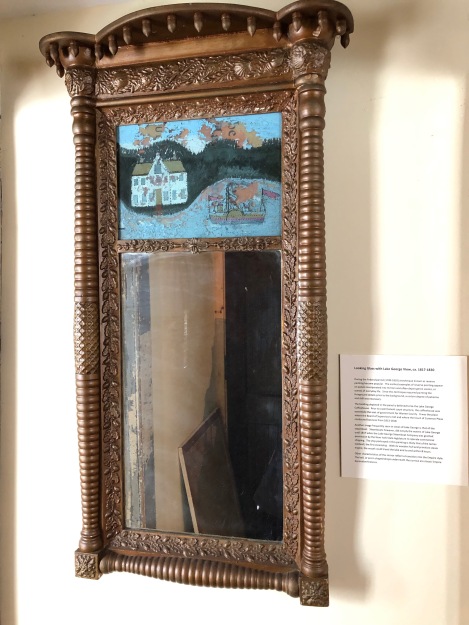 An early 19th century mirror with a reverse painting of the Lake George Coffeehouse (the seat of government in Lake George Village prior to the courthouse being built) and a steamboat, circa 1817-1830.

The Old Fort House Museum is open now for the summer season daily, from 1 to 5 p.m. The campus at 29 Broadway, Fort Edward, includes a complex of buildings, including the main 1772 building. The “Treasures” exhibit is housed in the Dutch House. In this writer’s opinion, the entire museum and its contents is a treasure. Info: (518) 747-9600. 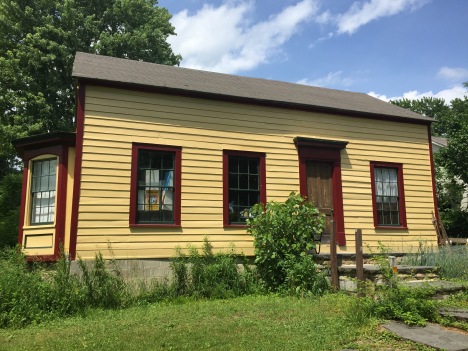 The Dutch House that contains the “Treasures” exhibit. 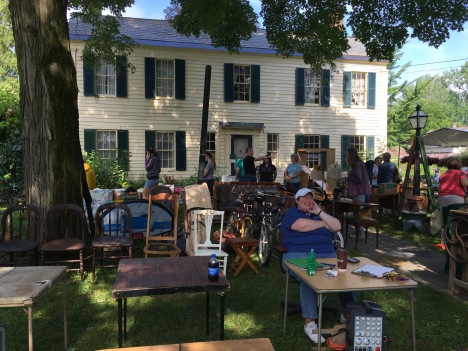 The main building at the Old Fort House Museum, 1772. Here, a scene of the museum’s annual Country Fair and Antiques Auction. This year, it’s happening on July 27, beginning at 9 am.