When our family told friends and acquaintances that we had decided to travel over the New Year’s holiday to Colombia, most looked at us in wide-eyed disbelief. “Why on earth would you go there?” was the most frequent reply. A few even asked us if we meant Columbia, South Carolina, not South America. 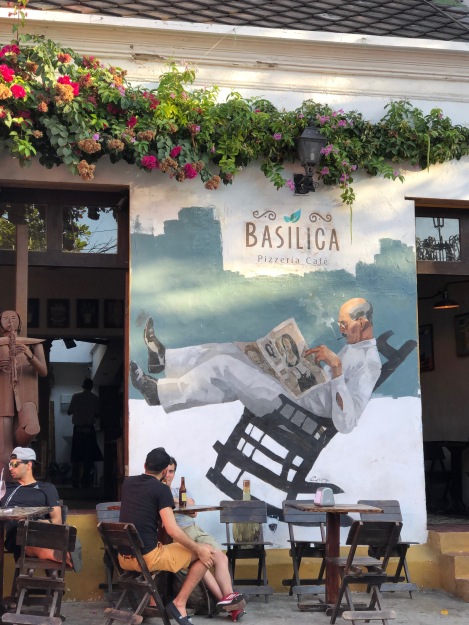 We whiled away some time at this cafe in Getsemani, a Cartagena neighborhood outside the walled colonial city.

In our experience, when most Americans hear “Colombia,” they think of violence, drug cartels, civil war and the infamous drug lord Pablo Escobar. Oh, and maybe Juan Valdez. But what hasn’t registered in many people’s consciousness is that the armed conflict in the country, which began in the early 1960s, for all intents and purposes ended in 2016, after the democratically elected then-president Santos negotiated a peace deal between the government and the Revolutionary Armed Forces of Colombia (known as “FARC”). This is a gross simplification of an highly complex situation, but basically, many areas of the country were deemed safe for travel after the armed conflict officially came to an end.

There are still US State Department travel advisories in effect, though, since some dissident groups are still active, such as the National Liberation Army (ELN), which sadly,  just a week before this blog post was written, detonated a bomb at a police academy in Bogota, killing at least 21 people.

Which gets us back to the question: Why go there?

Colombia is nestled into South America’s northwest corner, enjoying both Caribbean and Pacific coastlines. The country, about twice the size of Texas, includes a range of ecosystems, from soaring Andean mountains to vast rain forests, coffee plantations, and alluring coastlines with Spanish colonial towns. There’s an enormous range of tropical plants, fruits and creatures (especially birds). The people are of a diverse ethnic background of indigenous Amerindian people, Europeans, and Africans. 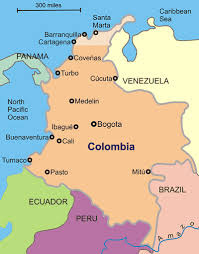 We had never been to South America, and this seemed like a good way to start– first with some Caribbean sunshine; then seeing with our own eyes compelling public works projects and social engineering in Medellin; and then moving on to visit Bogota, with the third highest altitude of any capital city in the world.

Described by many as the most beautiful Spanish colonial city in South America, the port city (called de Indias, to distinguish it from its namesake in Spain), was officially founded by Spaniards in the early 16th century and became the major port between Spain and its northern South American colonies. The main exported commodities were precious metals, mainly gold stolen from indigenous peoples, and silver, and later sugar and tobacco (coffee did not become a significant export until much later). Largely underplayed by printed tourism information, the city was also a major point of entry for African slaves, and it is believed that approximately one million slaves came through the Cartagena port.

Today, the atmospheric colonial city lies within massive walls constructed in the 17th century to protect the city and its riches from pirates and European invaders. The British privateer Sir Francis Drake invaded Cartagena in 1586 and occupied the city for more than two months, looting much of the city’s wealth. The locals have never quite forgiven him.

While most tourists flock to the walled, colonial city, the Bay of Cartagena is ringed with high rise buildings and a large port. There’s a great view while approaching the airport from the north.

Arriving late morning in Cartagena, our Airbnb wasn’t yet ready, so we dropped off our luggage and began to wander around the walled city. If you go, I highly recommend staying within the walled city. There are a number of boutique hotels as well as Airbnb options. The week around New Year’s is the most popular time for people to visit, and naturally, the lodging prices reflect this. It can be difficult to find an affordable place to stay (especially if, like us, you have five people), and reservations at highly-touted restaurants can be hard to get. (We booked a reservation at Carmen, a top restaurant, ahead of time, but could only get a spot for lunch.)

The streets of colonial Cartegena are filled with fruit sellers and street vendors, including women dressed in colorful dresses. The yellow, blue and red stripes echo the colors of the Colombian national flag.

Buying arepas on the street in Cartagena, at Bolivar Square.

These dancers and drummers were lined up outside the Palacio de la Inquision, which was the headquarters of the Spanish inquisition in Cartegena. We believe they were welcoming guests who were entering for an event.

Facade of home where Francis Drake lived during his occupation of Cartagena.

There are a few rooftop bars, as well as cafes/bars situated on prominent spots along the walls of the city. Perhaps the most popular spot is Cafe de Mar, where, if you’re able to grab a table, you get a great view of the sunset while sipping mojitos. 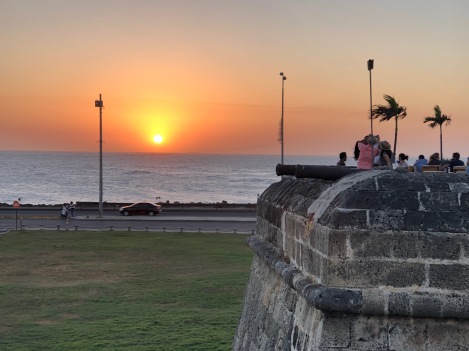 Cafe del Mar is on top of the walls. The people in the photo are enjoying the view (and drinks) from the Cafe.

At red-meat heavy Marzola parrilla argentina, the steak is served on cutting boards and the walls are covered with framed football jerseys, and photos of Pope Francis and other Argentinian-born famous persons. This is the exterior.

We had a fantastic meal at Carmen. Everything from the cocktails to the ceviche to the seared sea bass was other-worldly. A highlight of our time in Cartagena.

Once the main entry point into the walled city is the Plaza de los Coches, marked by the 19th century clock tower, Torre del Reloj, that sits above the entrance through the wall. The statue in the center of the plaza is of the city’s founder, Pedro de Heredia. 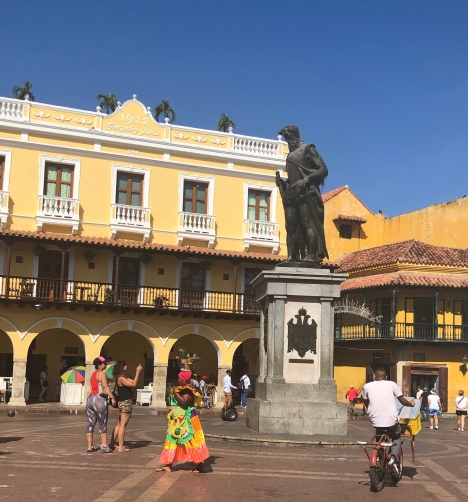 Around the Plaza de los Coches are bars, including rooftop bars, and the Portal de las Dulces, a row of stands where women sell homemade candies and sweets.

Cartegena is known for its door knockers. These originally made a statement about the wealth, trade or profession of the residents of the house. Here are a few I spotted. 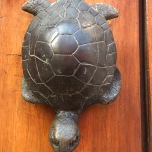 The walled city is filled with colorful buildings, often draped with flowering vines or plants.

Although Cartagena is on the Caribbean coast, the bay in which the city is nestled does not offer many appealing beaches. What many visitors do is travel by boat to the Rosario Islands, about a 45-minute to an hour ride from the city, where they can snorkel and enjoy white sand and turquoise waters. One day, we chartered a 38-foot boat, with a captain and mate, to take us to the islands.

Snorkeling off the Rosario Islands.

We drove past the former compound of Pablo Escobar, and even snorkeled over a nearby sunken plane, said to be one of his “drug planes” that had crashed and sunk. 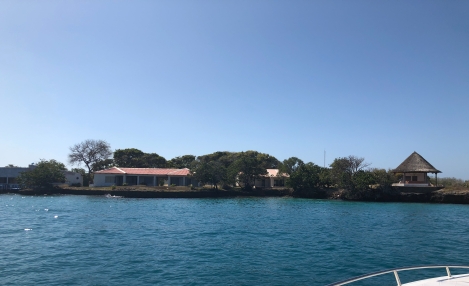 Former compound of Pablo Escobar in the Rosario Islands. 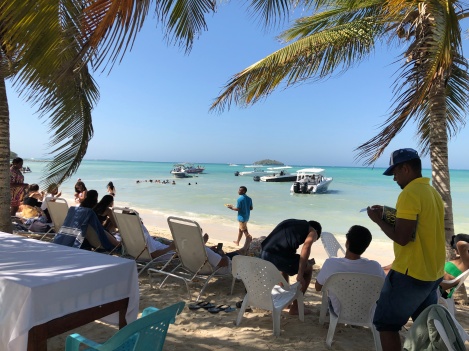 Lunch on the beach.

Cartagena on New Year’s Eve is basically one giant street party. Many narrow streets were barely passable by pedestrians because restaurants had set up dining tables for New Year’s Eve parties.

Our family ended up counting down to 2019 in Plaza de los Coches, along with a huge throng. When midnight came, the fireworks began! 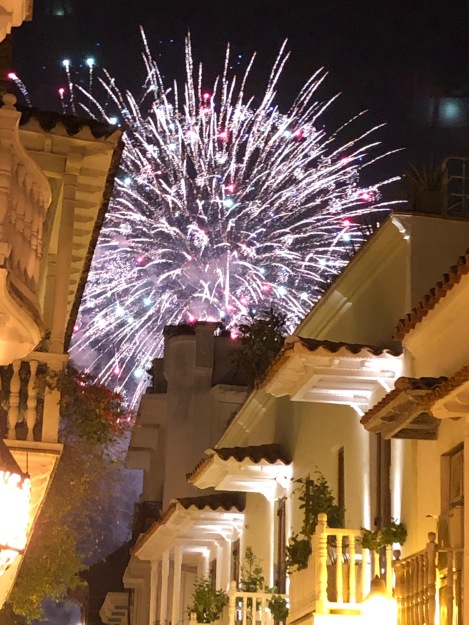 Just outside the walled city, in Getsemani, we happened upon a group of used book sellers.

A lovely cafe/bookstore is Abaco Libros y Cafe. I bought a English language paperback copy here of Gabriel Garcia Marquez’ Love in the Time of Cholera, which is set in an unnamed city, but which is assumed to be Cartagena. 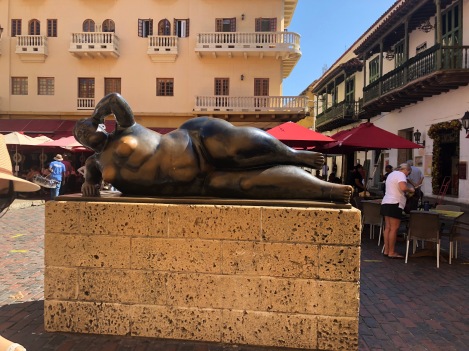 And they haven’t forgotten Christopher Columbus.

Also, sculptures made of pieces of metal are scattered around the city. They always depict some common aspect of life in Cartagena; here, a fruit vendor.

Finally, a panoramic photo view from our third story balcony at our Airbnb, looking out at the Caribbean sea.

If you go: in our experience, very few people speak English. I wish I had learned more Spanish before we traveled to Colombia, and now I’m practicing with online resources for an upcoming trip to Mexico.

It was tricky for us to convert Colombian currency, the peso, to US dollars, when looking at prices, since one US dollar is about 3,000 pesos. After a few days, we got the hang of the “math” by basically dividing the price in pesos by 3 (more or less).

We heard many warnings about petty theft in Colombia. We did not encounter any difficulties. We were, as always, aware of our surroundings and careful about leaving our mobile phones exposed.

Stay hydrated. The sun was intense in Cartagena, and the heat oppressive during the afternoons. Although we were told the water was safe to drink, we opted for bottled water instead.

STAY TUNED FOR PART TWO OF NINE DAYS IN COLOMBIA: NEXT STOP, MEDELLIN!