This is Part 2 of my blog post on our ten-day trip to Ireland in October, 2018. The first part covered Dublin, Belfast, the Antrim Coast (Carrick-a-Rede Rope Bridge, Giant’s Causeway and Bushmills Distillery), Ashford Castle in Cong, Connemara and Kylemore Abbey.

From Connemara, we headed south through County Clare, crossing through the area known as The Burren, a portion of which forms Ireland’s smallest national park. The area is marked by large expanses of bare rock, mostly limestone, that appear stark and forbidding. 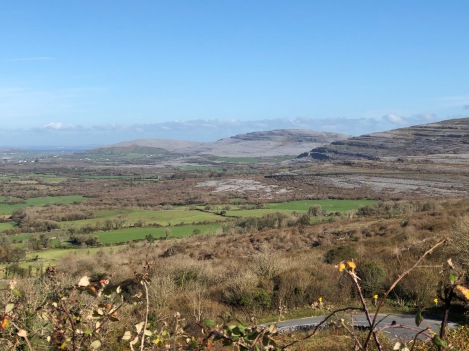 A view of exposed rock faces of the landscape of The Burren.

We continued driving to Killmer, boarded the Shannon car ferry at Killmer to cross the Shannon Estuary, to Tarbert, on the south side, in County Kerry, heading towards our destination of the Cliffs of Moher. By taking the ferry across the estuary, we saved at least a couple hours of driving.

The Cliffs of Moher are a huge tourist draw. These are precipitous cliffs on the Atlantic ocean that extend for about 14 kilometers. We arrived later in the afternoon, which made it difficult to photograph the principal cliffs because the sun was low behind them.

Some visitors engage in highly risky behavior at the cliffs, such as approaching the edge of the cliffs to take selfies, etc. This sign in the photograph below warns visitors about this. 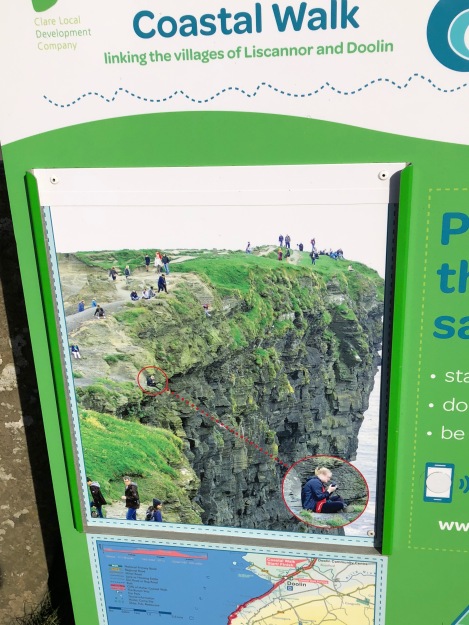 In the photograph that I took, below, some people are visible who are off the walking path and clearly too close to the edge. 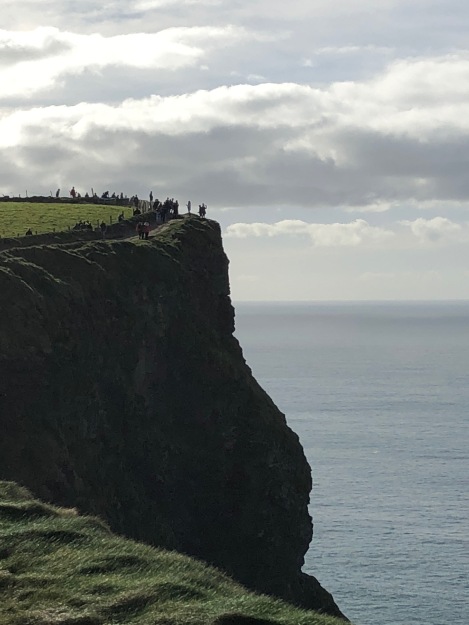 Atop one of the cliffs is O’Brien’s Tower, built in 1835 on the highest point of the Cliffs of Moher. For an additional fee visitors can climb to the top of the tower for an enhanced view.

On our first night, we were lucky to tuck into The Dingle Pub, where a duo was playing some traditional music but more often American folk and rock with an Irish twist (accordion and fiddle). But the main attraction was the appearance of David Geaney, a five-time world Irish dance champion, whose family owns the pub and lives upstairs. David, it turns out, was home for a period while preparing for an upcoming American tour. His dad and sister were tending bar; the pub was filled with locals and his family friends. He twice danced in the middle of the pub, first placing a square piece of plywood on the floor on  which to dance (his shoes have metal on the bottom for the “tapping” noise). The experience was one we will never forget.

It was so great, we went back the next night! David will be performing his show with two other dancers and musicians, on Broadway in New York, at the New Victory Theatre, from November 15 – 26, 2018. He is is also scheduled to appear on tour in the US with the band Cherish the Ladies, on their holiday tour. Check this Website for dates and info.

We checked out a couple other pubs in Dingle as well. Notable was O’Sullivan’s Courthouse Pub, where we heard the enormously talented David Healy on accordion and Gearoid O Dinnin on guitar. 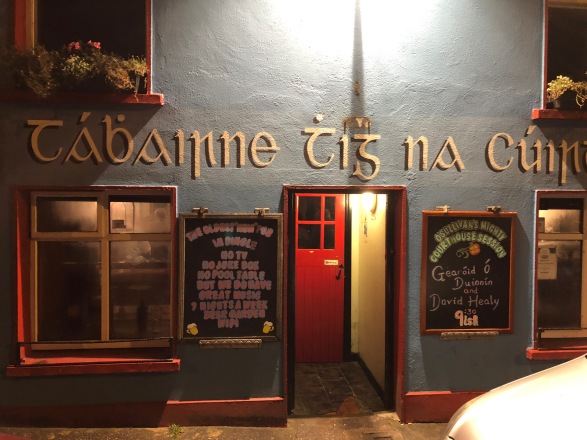 Exterior of the Courthouse Pub.

The one day we had available to actually drive the perimeter of the Dingle Peninsula along the coastal road, called the Slea Head Drive, was rainy and foggy. Because of that, we were not able to see many of the islands just off the coast, or some of the spectacular scenery.

The rain, however, made our visit to some “famine cottages” even more compelling. These are stone cottages that were inhabited during the 1840s, during the devastating famine that resulted in around one million deaths from starvation and disease, and the loss of another million people who emigrated from Ireland.

Inside the famine cottages we visited, mannequins and furnishings are intended to show the difficulties the residents endured.

Along the Dingle coastal road, we also visited some structures called beehive huts, dry-stone dwellings that are believed to date from around the 12th century, as well as the Gallarus Oratory, a dry-laid stone structure believed to be an early Christian church, dating from the 7th to 12th century. On the rainy day we visited, the interior was completely dry. 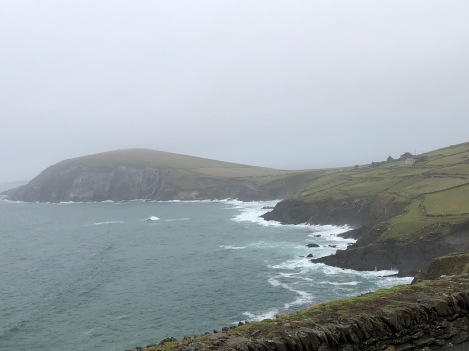 There is also a compelling museum called The Blasket Centre, that tells the story of the people of the Blasket Islands, who lived off the coast until 1953. A completely Irish-speaking population, the last inhabitants were evacuated by the government because of the declining population and the difficult way of life. In the late 19th century, a group of scholars and linguists began studying the population, and because of the scholars’ encouragement, a number of the islanders wrote books detailing their traditions and way of life.

This diorama in the Blasket Centre shows the location of residents’ cottages as they existed on Great Blasket Island.

The drive along Dingle Peninsula’s Slea Head Drive is lovely, even in the rain and fog. 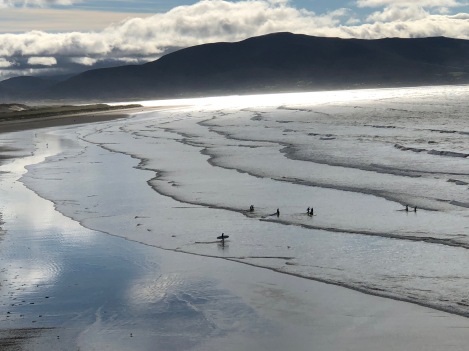 Heading east, leaving the Dingle Peninsula, we had a nice view of Inch Beach, a mile-long beach that is unusual along the rocky coastline because of its broad, accessible sand flats. The surfers were out in their wet suits.

Leaving the Dingle Peninsula, our next stop was near Killarney, where we took a hike within Killarney National Park, before driving through portions of the park. This forms part of the famous “Ring of Kerry.”

We took a hike from the headquarters of Killarney National Park, to see the Torc Waterfall.

Visitors can hire a “jaunting cart” to be driven around portions of Killarney National Park. 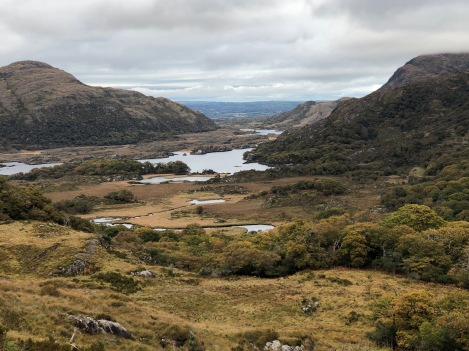 Autumn within the Ring of Kerry, Killarney National Park. Lots of gold and subdued colors.

Our last night in Ireland was spent in Killarney itself, which has a lively and bustling downtown. The main downtown streets are lined with locally-owned shops and businesses. 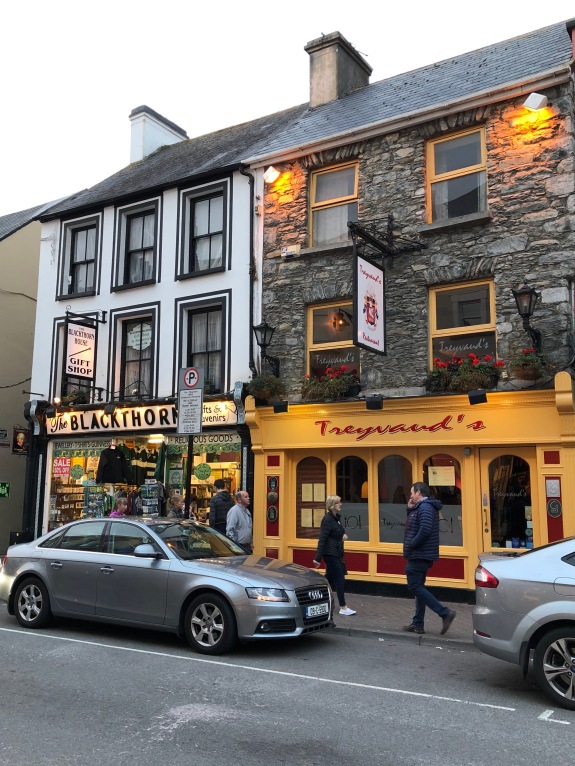 We had a great dinner at Bricin Restaurant in Killarney, which is upstairs from a shop that only sells items made or crafted in Ireland. 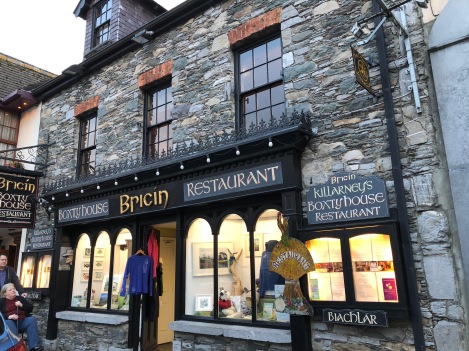 Interior of Bricin Restaurant, known for house specialty Boxty, a potato pancake with a choice of fillings. I opted instead for the perfectly prepared leg of lamb with mint sauce.

Tips for travel to Ireland

Book attractions ahead, online, so you don’t get shut out.

Rental car: even if you drive a manual transmission at home (on the right side of the road), pay the extra fee for an automatic and rent a built-in GPS unit.

With an American driver’s license, you don’t need an international driving permit to rent a car in Ireland

In Northern Ireland, there are a number of properties operated by the UK’s National Trust. By becoming a member of the Royal Oak Foundation, which is essentially a membership organization for Americans that support the National Trust, you have free admission to the hundreds of properties of the National Trust in England, Wales and Northern Ireland.  You also receive a parking pass to use at the properties. We used our membership at Carrick-a-Rede Rope Bridge and Giant’s Causeway, and there were other Trust properties we could have visited but didn’t have time for.

Just as I wouldn’t drive in England without our A to Z (Zed) road atlas, we bought a similar spiral road atlas for Ireland — published by Collins. Invaluable.

As our friend Anne Fuller had warned us, beware the “full Irish Breakfast.” Try it at least once though, for the experience, black and white “pudding” and all.

Above all, engage with the Irish people, whom we found universally friendly, and make sure to visit some pubs for traditional Irish music. And do try the Guinness stout. Even if you think you don’t like it, you might be surprised!

Please leave your own tips and comments below!