Note: This article was originally published in 2000 in The Chronicle newspaper’s Glens Falls Magazine. Several people I interviewed for the article are now deceased — Donna Lundgren, Catherine (Katie) Birdsall, and both Dan and Sara Robertson. William Smith, who took the photos on which Mr. Crockwell based his illustrations, died in 2005. Mr. Crockwell’s daughter, Margaret (Sister Mary), passed away in 2015. This article was reprinted and distributed by the Hyde Collection Art Museum in Glens Falls in 2016 in conjunction with its exhibit The Other Rockwell: Douglass Crockwell.

Additional note: Johanna Crockwell, who generously helped me as I researched this article, passed away in December, 2016. Jane Caffry Hawn passed away in April, 2018.

Spencer Douglass Crockwell, who died in 1968 at the age of 64, was a significant and fascinating figure in the recent history of Glens Falls. His story is more complex than many people realize, and reaches far beyond our own community into the larger world of 20th century American art. 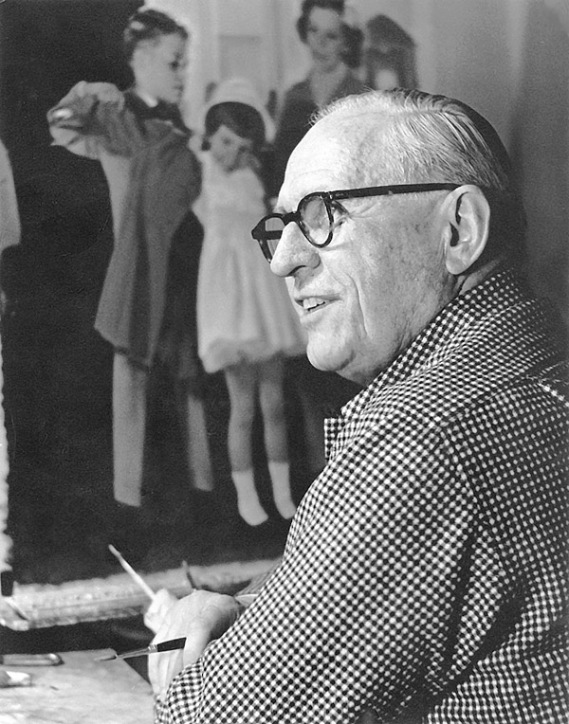 It’s a tale, in part, of phenomenal success as a commercial artist. Operating from his studio on East Sanford Street, Mr. Crockwell created illustrations that frequently became covers of Saturday Evening Post magazine, as well as seeing wide use in advertising, calendars, murals and portraiture. It’s estimated that his images were reproduced 3 billion times and that some 450 of his oil paintings were turned into full-page, full-color illustrations.

But Mr. Crockwell’s story is also one of lesser known but highly regarded achievement in science and avant-garde art. He invented cameras, made films shown at the Museum of Modern Art, and collaborated with David Smith, the Bolton Landing (N.Y.) abstract sculptor viewed as one of America’s dominant artists of the 20th century.

Yet Mr. Crockwell was as down-to-earth and involved in Glens Falls as he was intellectually adventurous. His friends often posed for his commercial art; they talk of these days with a delight made all the more precious by fleeting time. Mr. Crockwell was also a civic leader — chairman of the board of the Hyde Collection from 1952 until his death, a school board member, catalyst for creation of the Glens Falls Tennis and Swim Club.

“He was really quite a wonderful man — quite a wonderful man,” says Dan Robertson of Queensbury. He remembers Crockwell as a “great citizen. He was terribly interested in education, and the Hyde Museum. He was not remote from the community as you might expect some of the artists to be.” He describes the artist as “somewhat reserved, quite reserved compared to someone like David Smith, who was big and raucous.”

Dan and his wife Sara posed numerous times for Crockwell’s oil paintings. “A lot of us did,” Dan says. “Starting when we were eight to ten years old, my brother John and I would be in photos and our likenesses — or near-likenesses — would make it into those paintings.”

Donna Lundgren, now nearly 90, was one of Crockwell’s favorite models. Mrs. Lundgren keeps a folder full of magazine ads and illustrations in which she, her late husband, Thor (“Swede”), and their young sons appeared. 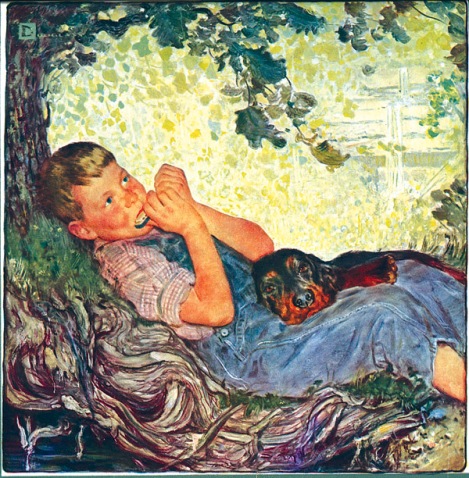 This painting of Bruce Lundgren appeared on the cover of a 1949 calendar for Avondale Mills of Alabama. Bruce, his two brothers, and his parents, Donna and Thor (“Swede”) were among Mr. Crockwell’s favorite models.

Mr. Crockwell would typically work from posed photos that he would have local photographer William Smith take. In creating the painting, the artist would sometimes take the liberty of mixing and matching personal features and furniture to fit his needs. Mrs. Lundgren laughs as she looks at one picture. “That’s me, with my friend’s hair, and her with my hair,” she says. The warmth of the memory is apparent. “We were such good friends,” says Mrs. Lundgren. “We were in and out all the time.

Born in Columbus, Ohio, in 1904, Mr. Crockwell came to Glens Falls in 1933, the year his first cover for the Saturday Evening Post was accepted. He’d first earned a business degree from Washington University in St. Louis, but even before graduation he was taking classes at the St. Louis School of Fine Arts. Thereafter, he studied at the American Academy in Chicago and then in Paris. He met his future wife, Margaret Braman, a fellow painter who hailed from Glens Falls, at art school.

The Crockwells settled at 245 East Sanford Street, Glens Falls, at the edge of the city limits. They owned 160 acres, now largely subdivided, but the area is still referred to by neighbors as Crockwell Farm.

Across from the house where the Crockwells lived is Crockwell Pond, now held by Warren County in trust for Adirondack Community College, which uses it for biological field work. The Crockwells were also responsible for the initial development of the nearby Glens Falls Tennis and Swim Club, having donated property on which to build the club.

Mr. Crockwell’s commercial art depicts idealized images of mid-century, middle-class life, not unlike those of his contemporary Norman Rockwell.

Mr. Crockwell signed his magazine covers “Douglass” instead of using his last name, “largely in deference to Norman Rockwell,” says Johanna Crockwell, the Crockwells’s elder daughter. She says her father and Rockwell were acquainted, and exchanged letters, adding, “He, like my father, was at his easel all the time.” 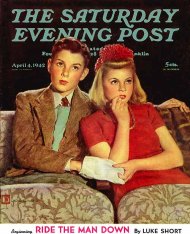 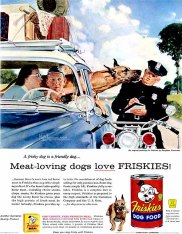 Douglass and Margaret Crockwell had three children. Besides Johanna, born in 1941, they were Spencer Douglass, Jr., born in 1938, and Margaret, born in 1945. Both Douglass Jr. and his mother died in 1995. Johanna lives in Vermont. Margaret, now Sister Mary, lives in a Russian Orthodox convent in downstate New York.

Mr. Crockwell’s scenes dovetailed with Glens Falls’s image of itself — scenes of family gathered for Thanksgiving dinner and of friends picnicking at the lake.

Katie Birdsall of Queensbury, another friend and model, says Crockwell asked people he knew socially to model. She recalls that photos were mostly taken at his studio, but that he took photos of her and her late husband, Steve, at their former house at 514 Glen Street, in the dining room. “It was fun to do and we all took turns. It was very exciting,” she says.

Jane Caffry Hawn, of Loudonville and Lake George, appeared in a multi-generational picture the artist did for the Ocean Spray cranberry company. She, her late husband attorney Glen Caffry, her late parents Dr. John and Charlotte Canaday, and her young son John Caffry appeared in the ad, which was published in magazines during the fall of 1960. They were posed for the photograph that Crockwell would use to create the illustration with an elderly woman and two other young children unknown to them, to assemble the idealized family he, and his client, wanted.

This illustration for a 1960 advertisement for Ocean Spray cranberry sauce depicts several generations of a Glens Falls family and is a good example of how Mr. Crockwell created his commercial art from a posed photograph. In the photo are (clockwise from left): the late Glen Caffry (then a prominent Glens Falls attorney); his wife, Jane Caffry Hawn; their young son, John Caffry (now a Glens Falls attorney); and the late Dr. John and Charlotte Canaday (John’s maternal grandparents). The two children at the extreme right are believed to be Jeff Liddle and Susan Dixon. The identity of the woman at the head of the table is unknown. 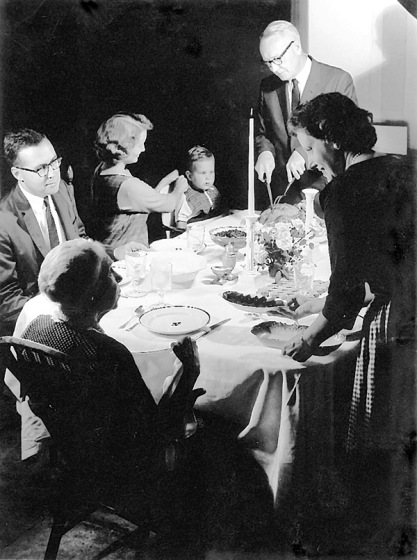 Mrs. Hawn says that Crockwell “was a very imaginative person, which didn’t always come across in his illustrations.”

Mr. Crockwell himself wished to be remembered not for his commercial illustration, but for his body of fine art and ground-breaking experiments in film and animation.

James Kettlewell, Crockwell’s friend and colleague who was a Skidmore College art professor and curator of the Hyde Collection, told this writer that the artist “saw his commercial art as hard work, like a person who goes to the office every day and writes novels at night.” Mr. Kettlewell compares Crockwell to the Renaissance luminaries, who were artists, scientists, inventors and mathematicians self-critically turning out commercial art while longing for the luxury of creating “real” art.

Johanna Crockwell agrees. “He was doing what he had to do to support his family,” she says. “He would work late at night doing his own thing.”

This example of Mr. Crockwell’s commercial work shows how his paintings of an idealized American life were used to sell products, like Seiberling tires. The parents are Donna Lundgren, and her late husband Thor.

“He was very disciplined and a hard worker — very prolific,” Ms. Crockwell continues. She, too, describes her father as a Renaissance man. “He was a thinker. He was basically a closet engineer as well as an artist.”

Mr. Crockwell’s personal art is highly sophisticated and encompasses not only painting and illustration, but advanced technical projects involving cameras, film and projection. He began experimenting with animated films in the 1930’s and collaborated with sculptor David Smith, molding wax to create a series of surrealistic style images or pressing oils between plates of glass for his animated films.

Two of Crockwell’s short animated films are preserved in the avant-garde film archives of the George Eastman House in Rochester; some of his other of his films are periodically shown at the Museum of Modern Art in New York.

Mr. Crockwell also experimented with what he called “sequential art,” creating a series of reels for machines based on vintage Mutoscopes, where abstract images would rapidly flash before the viewer’s eyes.

Mr. Crockwell’s knowledge of physics was so advanced that he published important scientific papers on subjects like the Doppler effect. At the time of his death he was involved in developing a system that would project slides onto a 180-degree scene to duplicate the effect of a camera panning a 360-degree circle. 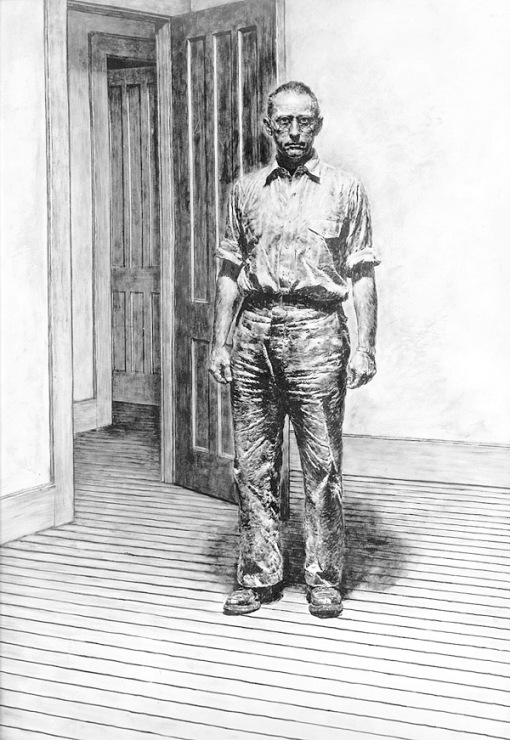 This self-portrait of Douglass Crockwell is believed to have been painted in 1945. It is his only known self-portrait.

“His best art was his earlier stuff, and it would have more of a clear value in the art world,” says Mr. Kettlewell. “It had a strong stamp or style of the 1930’s art-deco period on it.”

Johanna Crockwell says she “has no idea” of the market value of her father’s fine art, but estimates the auction value of the commercial pieces to be between $5,000 and $10,000 each.

Crockwell’s original artwork has been infrequently exhibited. In 1966, the Hyde mounted an exhibit of his work, with his collaboration, and again in 1977, nine years after his death. Crandall Library held an exhibition in 1942 that included background stills from his animated films as well as sketches for wartime murals.

The Chapman Historical Museum has a large collection of photographs, negatives and other items that belonged to Mr. Crockwell and were donated to the museum by his widow, Margaret. Museum staff hopes to use the collection as the basis for an exhibit in the future.

Johanna says her father was “ahead of his time as an American artist. He had been to Paris in ’29 and ’30, and he got the feel for the energy that had come from there, and applied it from an American experience.”