When I learned that there was going to be an event this summer to celebrate Beatrix Potter’s 150th birthday in Brewster, Mass., on Cape Cod, I was intrigued. But when I learned that the keynote speaker would be Susan Branch, a writer and artist I’ve long followed, I knew I had to go. When I ordered my tickets online, I saw that I had nabbed the last two remaining seats.

Many people know of Beatrix Potter, the English writer and illustrator, because of her series of beloved children’s books about Peter Rabbit and his friends. But Beatrix (1866-1943) was far more than a genteel Victorian lady who penned stories about woodland creatures like bunnies and hedgehogs and painted charming watercolors of them wearing clothing. She was a naturalist, a conservationist, a scientist, a farmer who raised Herdwick sheep, and a far-sighted land preservationist.

Starting with her purchase of Hill Top Farm in England’s Lake District when she was 39 years old, she began acquiring neighboring farms and ultimately owned 15 farms comprising more than 4000 acres, nearly all of which she left to the National Trust upon her death. It is she who is credited with preserving most of the land that now makes up England’s Lake District National Park.

I’ve also long been an admirer of Susan Branch, also a writer and watercolor artist, who has published numerous best-selling cookbooks, as well as a three-part memoir series.

Susan’s 2013 memoir, A Fine Romance — Falling in love with the English Countryside, includes a detailed description of her visit to the Lake District and Hill Top Farm, which was practically a spiritual experience for Susan, who is a huge Beatrix Potter fan.

All of Susan’s books are lettered in her own hand, and like Beatrix’s books, are illustrated with her own watercolors.

Susan’s most recent memoir, Martha’s Vineyard, Isle of Dreams, published earlier this year, is currently on the New York Times’ bestseller list (somewhat oddly, in the “travel” category). The book relates Susan’s journey when she moved in 1982 from California to Martha’s Vineyard, started a new life after her divorce, and began publishing her cookbooks.

These are the covers of Susan Branch’s hand-lettered memoirs. A Fine Romance tells the story of her trip to England (traveling there on the Queen Mary 2), with a section devoted to her visit to Beatrix Potter’s Hill Top Farm in the Lake District.

July 28, 2016, would have been Beatrix’s 150th birthday, and my childhood friend Elissa and I attended the party, which was co-sponsored by the Brewster Ladies’ Library and Cape Cod-based members of the British-based Beatrix Potter Society. Four hundred free tickets to the event became available online on May 1, and within two days, the event was sold out.

Update: The Brewster Ladies’ Library has published a video of the program I attended! Find it here. It’s an hour and a half long, so put your tea kettle on!

Beatrix’s party was held next door to the library, at the Brewster Baptist Church, with the presentations in the large sanctuary and refreshments (birthday cakes) and book selling and signing in the church’s fellowship hall. After hearing some background about the library, which was founded in 1853 by 12 women as a subscription library (“Men could borrow books, but they were charged more,” we were told), the first American trustee of the Beatrix Potter Society, Betsy Bray, gave a slide show entitled “Beatrix Potter 101.”

Susan Branch, on the right, was interviewed in front of a crowd of hundreds of fans, by Betsy Bray. The image on the screen is of Beatrix Potter.

We learned that Beatrix grew up in the upper middle class of Victorian London, the daughter of a lawyer. As was the custom, Beatrix and her brother Bertram were educated in their home by governesses. As a child, Beatrix summered with her family first in Perthshire, Scotland, then later in England’s Lake District. She was intently interested in nature, kept small animals as pets, and began sketching and painting as a young girl. She was especially fascinated by fungi and mushrooms, and even wrote a paper on mycology which was submitted by a male botanist at Kew Gardens (she was not able to submit because of her gender) to the Linnean Society in 1897.

The first Peter Rabbit books were based on letters Beatrix wrote and illustrated that were sent to the children of one of her governesses. 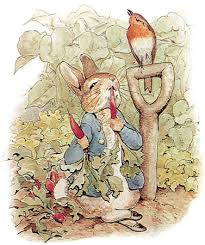 After self-publishing her first book in black and white in 1900 about “four little rabbits whose names were Flopsy, Mopsy, Cottontail and Peter,” the publisher Frederick Warne & Co. agreed to publish The Tale of Peter Rabbit in 1902, printing Beatrix’s watercolors with a three-color process.

In 1905, Norman Warne, who worked in his family’s publishing company, and Beatrix, became engaged. Sadly, Norman died of leukemia only a month after the engagement was announced. Soon thereafter, Beatrix bought Hill Top Farm, and began to acquire adjacent working farms. In 1913, she married William Heelis, the country solicitor who helped her with her real estate transactions. They lived out their lives focused on land preservation and conservation, managing farms, raising the local breed of Herdwick sheep and collecting and furnishing the farm houses with antique local furnishings and crafts.

Beatrix went on to publish 23 books in all. Here are just three of the covers, featuring her woodland creatures with human personalities (and clothing!): 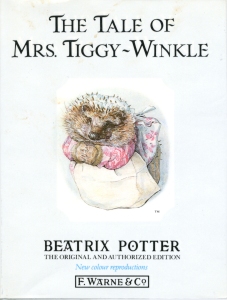 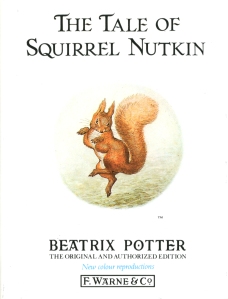 Susan Branch spoke about her admiration for Beatrix Potter

The program continued with a “Q and A” with Susan Branch, and a reading by Susan of portions of her memoir about visiting Hill Top Farm. Susan said she did not read Beatrix Potter books as a child, but began collecting ceramic figurines of the books’ characters in her twenties. She then started reading about Beatrix, became fascinated with her life, and decided she had to visit her home eventually. Susan said she thought that for Beatrix, after having been raised under the constraints of her Victorian family, and having her fiancé die, that “Hill Top Farm for her was like a primal scream.” It was highly unusual for a woman at that time to go out on her own.

After Beatrix married William Heelis, they lived not in the Hill Top farmhouse, but in a nearby house, called Castle Cottage, which is not open to the public. But Beatrix used Hill Top as her “toy,” said Susan, furnishing it, using it as a workshop and studio. And it is Hill Top that Beatrix left as she wanted it to be seen, filled with her and her brother’s art, her personally embroidered items, wallpaper she chose, antique country furnishings, and surrounded by a climbing roses and a vegetable garden that inspired her.

When asked what words she would use to describe Beatrix Potter, Susan said “original, creative, far-sighted (trying to protect land from developers in the early 1900’s), and a lot of common sense.” When asked about words to describe herself, Susan said “curious, tenacious (like a dog with a bone), and grateful.”

Susan urged the audience members to join the Beatrix Potter Society, joking that she first joined it in part because she “just kind of wanted to get mail from England.” But Susan followed up by saying “Heroes are so important to us, and it’s great to have someone to look up to.”

What’s next for Susan Branch? She and her husband Joe Hall have just returned to their home on Martha’s Vineyard after a 2 1/2 month book tour that took them to 23 cities. In September she and Joe are headed back to England, again sailing on the Queen Mary 2 (their first trans-Atlantic crossing on the Queen Mary 2 was described and illustrated in A Fine Romance). They will visit not only England again, but Scotland.

Half a million “Girlfriends”

Susan writes a popular blog (find it at susanbranch.com), and promises to take her readers along on her trip, as she did with the last. According to Publishers Weekly, the blog has between 350,000 and 500,000 readers —which Susan calls her “Girlfriends.” Over 53,000 subscribe to her quarterly newsletter.

After having her cookbooks published for years by Little, Brown, she stepped away from the large publishing house by working with a “hybrid press” on Martha’s Vineyard to publish A Fine Romance in 2013. She and Joe  then created their own imprint, Spring Street Publishing, in 2014. She has since then self-published a 10th anniversary edition of her cookbook and lifestyle book, Autumn; The Fairly Tale Girl (part one of her

autobiography); Martha’s Vineyard, Isle of Dreams; and a revised and expanded edition of her first cookbook, Heart of the Home (available September 1 in bookstores but now available through Susan’s Web site, or from her directly at book signings before then.)

Following the program, and after a quick chat with Susan and having my pile of books signed, I had a nice conversation with Joe Hall. When I complimented him on the quality of the paper in Susan’s memoirs, and told him I live in the city where Finch paper is manufactured, he said they chose between two papers for the books, one of which was made by Finch. While they didn’t end up using Finch, I urged him to consider it for upcoming projects. We also had a discussion about possibly hosting Susan in Glens Falls for a book event. If anything develops, I will let you know.

A couple of books (and a film!) I can recommend about Beatrix Potter:

At Home with Beatrix Potter by Susan Denyer. Frances Lincoln Limited, 2000. Published in association with the National Trust. 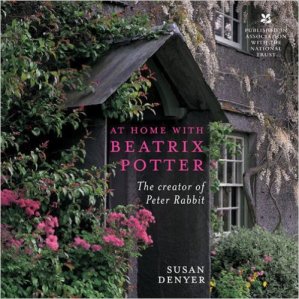